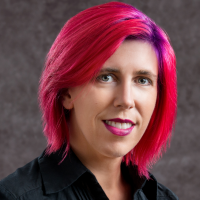 K.M. Smith writes vampire novels. She enjoys reading them, too. She lives in the suburbs of Houston with her husband, children, and pets. Outside of writing, she can be found on the tennis courts or helping her children with school. 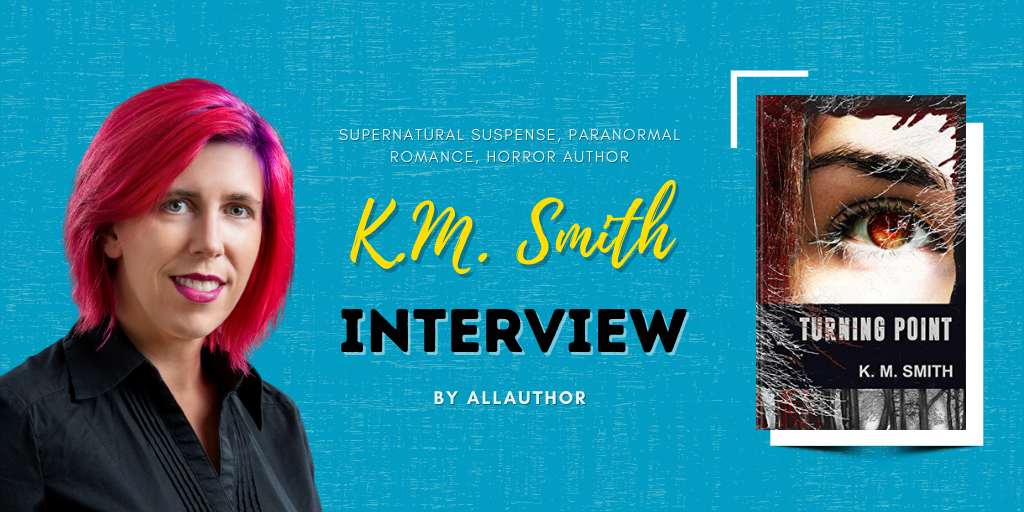 "K. M. Smith is an author and an avid tennis player. Born in Kalamazoo, Michigan, Smith currently resides in Texas. She loves the freedom that comes with being able to write outside the boundaries of the natural world. Her books are a thrill to read taking you to a different world."
Where were you born? Which is your favorite childhood memory?

Kalamazoo, Michigan. Family holiday parties when everyone was together. We used to all go to my aunt and uncle’s for New Year’s Eve and those were the best times. I loved going to my grandparents’ houses on both sides of the family during Christmas. I have a lot of cousins and aunts and uncles, so the houses were always packed and as kids we just played and played. Very fond memories.

Do you remember the first book you picked up to read? What was it about?

The first one I really remember reading cover to cover was Charlie and the Chocolate Factory. I even went on to read Charlie and the Great Glass Elevator. I think I was in third grade at the time. I remember curling up in my dad’s chair and reading all weekend. Normally, I played outside a lot and didn’t slow down enough to read, but those books caught my attention. I also recall loving Different Seasons by Stephen King. It’s actually four stories in one book, and one of the stories, The Body, is the story that the movie Stand By Me is based on. I loved that movie as a young teenager, and when I finally read the story behind it, it stayed with me.

Have you ever had a supernatural experience?

Not really. But I get eerie stuff happening a lot. Déjà vu, and sensing things that are going to happen before they do. Not really premonitions or anything, just some awareness under the surface.

I’m lucky to have several people who support me. My husband is the biggest supporter of all because he encourages me to spend as much time as I can/want to working on my writing. Because of his support I can write when the muse strikes.

What do you love the most about writing supernatural suspense?

I love the freedom that comes with being able to write outside the boundaries of the natural world. I don’t bend things too far, but when I write about vampires and blood loss, I can just come up with ways that make it so that losing all that blood doesn’t really matter to the human. lol. I also love coming up with new story ideas and situations for my characters to get into (and out of!)

What are some unique ideas for vampire novels? What would you like to see written?

I wanted to see stronger human (or mostly human) female characters. I also really like the vampirism as virus stories of late. I think there are a lot of avenues to explore there. Anything that allows for humans and supernatural beings to coexist – even if the humans don’t realize it.

What challenges did you face while writing your book, "Turning Point"?

Time. Distractions. Parenthood. Everything takes time and there are only a finite number of minutes in each day. Many of those minutes are spoken for, especially when the kids were younger. I also learned a lot more about the craft of writing through writing this book. Sentences or paragraphs that I thought were inspired often ended up being totally rewritten for one reason or another, or cut completely because they didn’t help the story along.

Who inspired the character of Alice Peterson in "Turning Point"?

Alice is mostly me as a young woman. I see her, especially in this book, as someone who would make similar choices to me in most situations. That changes as her story unfolds, but primarily, it’s me.

Why did you decide to set the story of "Turning Point" in Michigan?

The short answer is I’m from Michigan. I know the location intimately. Most of the places are or were real at some point. I also wanted somewhere that had a really great autumn. I miss autumn now that I live in the south.

Do you begin writing a story with the ending already in mind?

Not usually. I’m more of a pantser. I have a general idea, but I have found that I often deviate even from my own plans.

What are some tips for becoming a professional tennis player?

Play a lot? Start young? I have no idea. I play recreationally (competitive, but no one pays me to play ), but I play as often as I can.

What are some lesser-known sights to see when visiting Houston?

Walking along Buffalo Bayou is a great way to experience the city. There are a lot of opportunities to experience nature here that you might not expect.

I have gone to first person POV for book two in this series and I struggle with sentence starters. Many sentences originally start with “I…” but that isn’t very interesting, so I work hard to vary the structure.

Well, as alluded to above, I am working on book two in the series. It doesn’t have a title yet, but it follows Alice on her journey to discover who she is and who (or what!) she is becoming. I also have another WIP that involves vampires and tennis. Two things I love!!

When did you join AllAuthor and what are your opinions about the website so far?

I joined only a few months ago, I can’t remember exactly when…maybe August or July? I really like the way AllAuthor supports its authors. There are so many ways to promote my book and AllAuthor helps by also promoting my book. The tweet scheduler is particularly useful.

K.M. Smith is a thinker and a doer. These are the quotes by famous personalities the author resonates with.

People are just as happy as they make up their minds to be.
Abraham LincolnHappiness 121

Oh Lestat you deserved everything thats ever happened to you. You better not die. You might actually go to hell.
Anne RicePunishment 43

Have brimming questions to ask author K.M. Smith? Ask the author whatever you like, but keep in the appropriate zone.
** Please note, unanswered questions will not appear on the page and refrain from posting promotional messages.

The author, a good book and you. Contact K.M. Smith here.
** No Spamming: Spam is an irritant to regular users or the authors. Please note that bombarding promotional mails/messages is strictly prohibited. Your IP address may be blocked if found doing so.