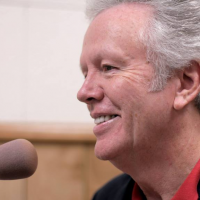 Merle Temple is a native of Tupelo, MS. He received two degrees at Ole Miss, and is the author of the Michael Parker series: Deputy: Once Upon A Time in Mississippi, A Ghostly Shade of Pale, A Rented World, and The Redeemed: A Leap of Faith.

The novels are written as fiction but drawn from his experiences as a deputy sheriff, an agent in the first "drug wars," the first captain in the Mississippi Bureau of Narcotics, a manager in the corporate world, a campaign chairman in the corporate and political wars, and an evangelist in prison.

Merle was held hostage by drug dealers; hit men tried to kill him near Memphis; and he and his team were ambushed by a sniper. He learned that the gangsters, who tried to kill him, were just choir boys compared to the political criminals who use the full power of the state to crush their enemies in an unholy trinity of politics, crime, and business.

Merle signed books for the cast of Criminal Minds in Hollywood, met with producers, dined with Morgan Freeman, and had a private lunch with Christian apologist Ravi Zacharias. His books were received at the Jaffa Gate in Jerusalem by Canon Andrew White, the "Vicar of Baghdad," and X-G Productions is now pitching his books for a proposed TV series based on a life story that epitomizes the saying,"Truth is stranger than fiction."

Ghostly, the all-time bestselling novel for Barnes and Noble in North Mississippi, was chosen by one college as required reading for English students, and his books are used in middle school and high school English classes in several states. The novels are favorites in church libraries, shelters, and prisons in eight states.

Merle's books fulfilled a promise to God to tell his story and God's story of second chances and redemption. He signs books across America, does countless interviews on radio and TV, and speaks at churches, schools, civic clubs, and libraries to recount a story that some liken to a modern day Pilgrim's Progress.

Have brimming questions to ask author Merle Temple? Ask the author whatever you like, but keep in the appropriate zone.
** Please note, unanswered questions will not appear on the page and refrain from posting promotional messages.

The author, a good book and you. Contact Merle Temple here.
** No Spamming: Spam is an irritant to regular users or the authors. Please note that bombarding promotional mails/messages is strictly prohibited. Your IP address may be blocked if found doing so.