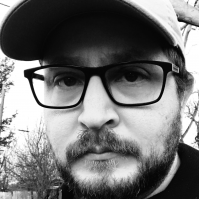 Michael C. Sahd grew up in Santa Fe, New Mexico. From a young age, he read voraciously, particularly in the fields of fantasy and science fiction. Shortly after becoming a teenager, he learned to play and enjoy fantasy games such as Dungeons and Dragons. At around the same time, he began writing stories and D&D campaigns of his own.

As an adult, Michael attended the College of Santa Fe, studying in the fields of English and literature. During this time, he honed his writing skills and expanded his writing portfolio. Although he has completed numerous short stories, Assassin Marked represents his debut published work. Most recently, he published his first full-length fantasy novel, The Unfettered Child.

Currently, Michael lives with his wife and four children in a small town in Texas, where he is working on writing the next installment of The DuFonte Chronicles, Lavender Rose. Lavender Rose is being published episodically on Kindle Vella. 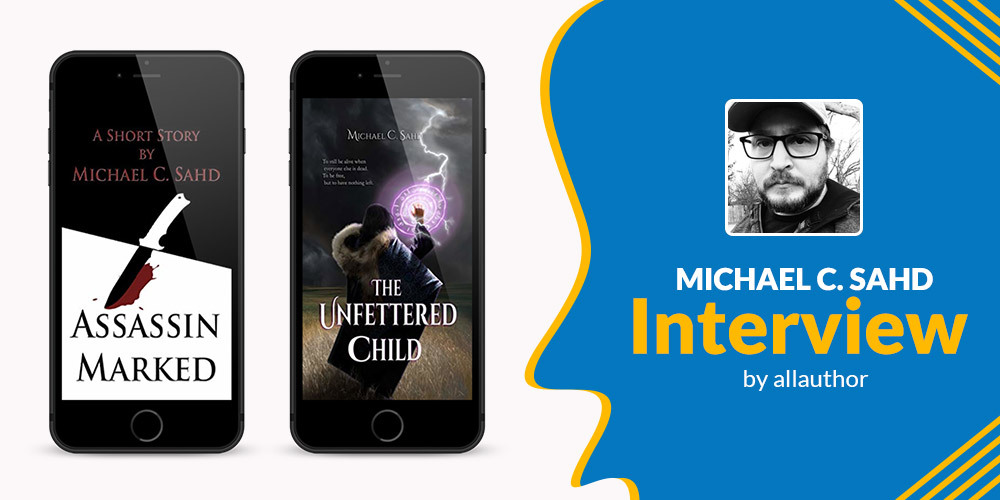 "Michael C. Sahd grew up in Santa Fe, New Mexico. He played Dungeons & Dragons religiously every Friday for over 7 years. The best motivator is when he turns on some music and just go. He needs music. It's very motivational for him. As an adult, Michael attended the College of Santa Fe, studying in the fields of English and literature. He is currently working on Lavender Rose, the second book in The DuFonte Chronicles."
Growing up in Santa Fe, New Mexico, which is your favorite childhood memory?

My friend and I would play this game called counting coup. Basically it was like hide-and-go-seek, but it had more emphasis on moving stealthily than the classic game does. There was no "it." We would run in opposite directions and hide. Then we would sneak around trying to get the better of each other with a stealthy tap on the shoulder. If we spotted each other, we would run off in different directions and start over again. The nice thing about this game was that we had roughly forty acres of rough country to play on, and we would sometimes even spill out onto other peoples' land. Nobody seemed to mind. It was a lot of great fun.

What caught your interest in the fantasy and science fiction genre?

I could claim many things. I read The Hobbit first, then The Lord of the Rings series, which then got me into Dungeons and Dragons. On the sci-fi end, I am still a Star Wars and Star Trek fan to this day. Then Serenity, followed by Firefly, just solidified that interest into a great love.

How much did you enjoy playing fantasy games like Dungeons and Dragons?

I played Dungeons & Dragons religiously every Friday for over 7 years. Our friend Kim would host it at her house and we would stay until very late. I tried picking it up again in recent years, but time constraints with kids and school make it very difficult.

How has studying in the fields of English and literature helped you shape into a writer?

Any writer will tell you that reading is the best way to learn to write. While I studied these courses, I was introduced to many different kinds of novels, epics, and stories. It broke me out of the stereotypical fantasy genre I was so keen on before I started taking these classes. I learned there is more to writing than just a great anecdote, and that is to make your characters feel. World building is great, but I can't say it's my thing anymore. I want people to know my characters, to understand how they're feeling.

How did you begin writing "The DuFonte Chronicles" series? When writing a series how do you keep things fresh, for both your readers and also yourself?

Assassin Marked actually began as a short story I wrote for dialog practice in a creative writing class. The original story was just the first chapter of the novelette, and I added the other chapters later. This is the first series I've ever begun, and I haven't finished writing the second book yet, but I strive to keep extensive notes on the progress of the characters so that I can be sure to keep things fresh and to give them new adventures.

Who inspired the character of eight-year-old Samara in "The Unfettered Child"? How were you struck with the idea for this novel?

I actually was running a D&D campaign, in which Samara was an antagonist. She was a young girl possessed by a demon, causing mischief and mayhem in a small village. The adventurers had to figure out how to save both the town and the young girl. However, the story has obviously evolved a lot since then. Having my own children and the fear of losing a child that comes along with that played a huge part in the creation of the story. I also used my own eight-year-old daughter as a model for the young girl in the story, mixed with some of my own childhood experiences to flesh out the character.

What is your one mantra to get through everything in life? What keeps you motivated to write?

I can't really pinpoint anything so specific. I need to have rest. However, the best motivator is when I turn on some music and just go. I need music. It's very motivational for me.

I plot out a basic idea in my head. I take notes, and I even make a rough outline sometimes, but when I actually sit down to write, the story takes its own direction. So I would say a little of both, but mostly, I create it as I write. The ending of The Unfettered Child was as much a surprise to me as I hope it is to my readers.

My favorite part was the fact that I was actually getting published. It was so exciting. My least favorite part is all the marketing that I had to do. I find it difficult to talk about myself, but as an author, so much of your brand marketing is you.

When did you decide that "The DuFonte Chronicles" is going to be a series? Which part of the first book was the most fun to write?

I think I decided to make The DuFonte Chronicles a series after so many people started asking for more of the story. I don't actually like Damian much, and would have been happy to drop the series at Assassin Marked. However, as I write Lavender Rose, Damian is blossoming into a character with a lot more depth, and I think I can keep going.

As I mentioned before, the first chapter of Assassin Marked was written as practice for a writing class, and it was a lot of fun to write. One of my friends actually had a peek at it long before anyone else did, and she hated it. Although I must say, it is much different now than it was then. Especially after my wife/editor got her hands on it.

From Assassin Marked, Victoria is directly named after a good friend of mine. Otherwise, I don't really have any particular method. Kirin Ichiban, from that same story, is named after the Japanese beer, and I find that humorous.

The Unfettered Child had a more organised naming method. Samara and Orin's culture is a mix between the Nemets (the nomads from Siberia) and the Apache native Americans, but I chose Russian names when naming most of the characters. Samara, on the other hand, had a Havallan name. The Havallans are members of a vast empire that has conquered most of the world that Samara grows up in, which is modeled after the ancient Ottoman Empire. Hence, I use Arabic names for most of the Havallans.

I don't know about retire from writing, but I can see retiring from publishing. I don't know. That's so far in the future, it's hard to think about.

What are you currently working on? When can we expect the next book to release?

I am currently working on Lavender Rose, the second book in The DuFonte Chronicles. I hope to finish writing it in November, but that is optimistic. Then it goes to my editor and who knows how long that will take. It will probably (read: hopefully) be next year around this time. But I'm definitely not going to rush it.

Get on social media and put yourself out there. Get as many followers as you can before you start writing, and talk about your writing. People need to get to know you if you want to sell any books. I also suggest making your own website, to keep a blog on. Then you should make accounts on as many book websites as you can (Goodreads, BookBub, AllAuthor, Library Thing, iAuthor, etc). Finally, just like any other business, you must spend money to make money. Your writing is an investment.

When did you first join AllAuthor? What do you think of the experience so far?

I've only been a member for a few months, but AllAuthor is amazing. It has so many resources for authors. I'm particularly partial to the free mock ups that they provide every week, which I have used in many places and in multiple ways to advertise The Unfettered Child. The ability to make review GIFs is awesome too. The AllAuthor staff are also very supportive and consistently tweet about my books. I would (and do!) definitely recommend the site to other authors and readers.

Michael C. Sahd is a thinker and a doer. These are the quotes by famous personalities the author resonates with.

A smooth sea never made a skilled mariner.
English ProverbAbility 117

Ability and necessity dwell near each other.
PythagorasAbility 82

Have brimming questions to ask author Michael C. Sahd? Ask the author whatever you like, but keep in the appropriate zone.
** Please note, unanswered questions will not appear on the page and refrain from posting promotional messages.

The author, a good book and you! Contact Michael C. Sahd here.
** Please refrain from spamming and don't bombard the author with promotional mails/messages. Your IP/Email address may be blocked if found doing so.