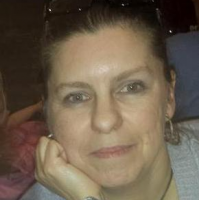 Natalina wrote her first romance at the age of 13 in collaboration with her best friend. Since then she has ventured into other genres, but romance is first and foremost in almost everything she writes. She’s the author of We Will Always Have the Closet, Desert Jewel, Loved You Always, and Lavender Fields.
After earning a degree in tourism and foreign languages, she worked as a tourist guide in her native Portugal for a short time before moving to the United States. She lived in three continents and a few islands, and her knack for languages and linguistics led her to a master’s degree in education. She lives in Virginia where she’s taught English as a Second Language to elementary school children for more years than she cares to admit.
Natalina doesn’t believe you can have too many books or too much coffee. Art and dance make her happy and she is pretty sure she could survive on lobster and bananas alone. When she is not writing or stressing over lesson plans, she shares her life with her husband and two adult sons. 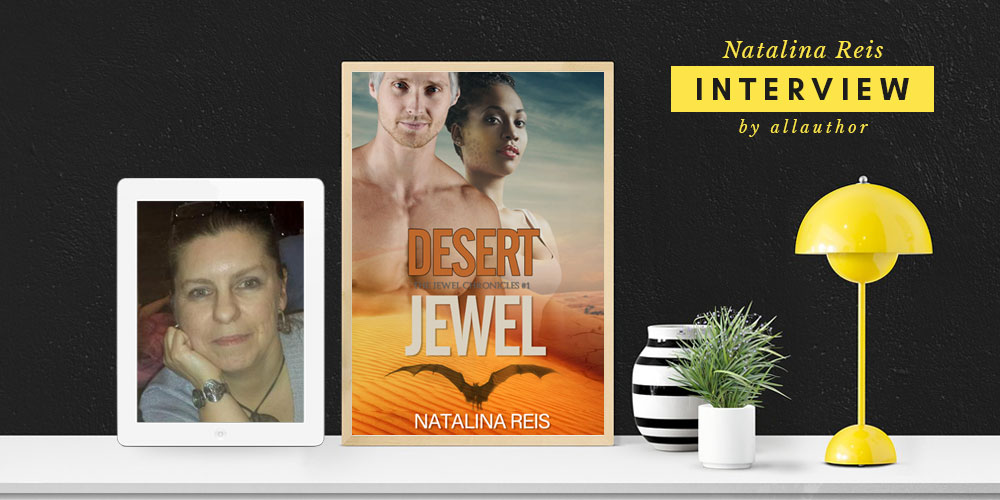 "Growing up a little bit everywhere, author Natalina Reis was exposed to many different places, cultures and social structures. She has been a writer since she could put two words together. She remembers being 7 or 8 years old and writing short poems about things she had just come to realize or learn. The author loves writing witty romantic comedies as much as darker and heavier fantasies. The writing influenced her teaching. Being an avid reader since childhood, the author reads a lot of young adult literature, especially fantasy and paranormal stories. She is currently working on book three of The Jewel Chronicles."
Where did you grow up? What was your childhood like and how has it influenced you as an author?

I grew up a little bit everywhere. I'm from Portugal but I spent my childhood between Portugal and Africa. I was exposed to many different places, cultures, and social structures. I had great teachers and absolutely horror flick worthy ones, I lived in places and houses where there was no running water or electricity, I witnessed abject poverty and hunger, power abuse, you name it. All of this influenced the way I look at life and obviously my writing. My goal when I write any kind of story is to explore the concept that we are all unique but we also share a lot of the same characteristics and that's what makes life so interesting.

Have you always been a writer? What was your first romance that you wrote at the age of 13 about?

I’ve been a writer since I could put two words together. I remember being 7 or 8 years old and writing short poems about things I had just come to realize or learn. Being an introvert and a very shy kid writing was (and still is) my voice, my way of communicating with the world. My first romance was called “Friends” and it was written during Spring break with my friend Susana. I was living in Santa Maria Island, part of the Azores and she had come to spend the holiday with me. We spent many an hour stretched on top of the bed writing notes and exchanging ideas. It was a totally cheesy and awful story but so much fun to write.

The titles of your books are very intriguing and creative. How do you come up with these titles?

It’s hard to explain. I normally focus on an aspect of the story and try to come up with titles that kind of allude to it. For example, Blind Magic features a blind detective and a modern witch and in Her Real Man, the main character, a romance writer, sick of writing about men that have very little to do with reality, goes looking for someone more “real” to inspire her.

Like I said before, I have witnessed (and been part of it myself at times) the disparity of wealth and power in this world. When I lived in Kinshasa (a long, long time ago) I worked at an import/export company and one of my many duties was payroll. I was appalled the first time I had to do it and realized people with the same level of education and experience had such a different pay. The non- native single employee lived in the lap of luxury while the native employee with a family was paid peanuts for the same job. I was even more shocked when I had to drive to the native employee’s “house”. I don’t think I slept that night. So, yes I did want to bring these imbalances in human societies to light but I also wanted to make a simpler point; the fact that we should never judge a book by its cover, that no matter how wonderful someone’s life seems to be, there could be layers of pain underneath the outside sparkle.

How did you come up with the idea for We Will Always Have the Closet?

It started with a prompt. I had to write a flash fiction piece where the main protagonists, strangers to each other, were caught doing something they were not supposed to and had to ad lib some excuse together to get out of it. I loved the characters and the concept so much, I decided to expand it into a full novel.

Who is Petra Galatas and what is her dilemma?

Petra is an art lover divorcee who feels like a failure. Her marriage was a disaster as her ex- husband made her feel small and irrelevant. When she finds out that Sam is investigating her ex for art fraud she feels that she has to prove him wrong, because having been married to a crook would reflect badly on her, it would make her feel an even bigger failure.

The latest novel in The Jewel Chronicles is Snow Jewel. Can you tell us something about this book and how it relates to the first novel? Can it be read as a standalone?

Snow Jewel is a fantasy with a very strong romantic sub-plot who continues the journey of Princess Milenda and her man, Jaali. Even though it can be read as a standalone, I strongly suggest that the two books (the third to come in 2019) be read in order. The reader will then get a better picture of the characters and their struggles. In the first book the story develops in Milenda’s kingdom in Afrika and their story continues in Jaali’s homeland in the far north in Snow Jewel. It’s a story about prejudice and too much power in the hands of a few—how it can affect whole societies and cultures. It also emphasizes the message that with love and determination you can do and bear just about anything.

What aspects of love do you try to accentuate through Milenda and Jaali’s story?

Total trust and intimacy—of body and mind—is a strong aspect throughout the story, but also the notion that love surpasses and defeats deeply ingrained fears and prejudices and superstitions.

Do you enjoy writing contemporary romance more or fantasy? Which genre is more challenging and why?

I love both equally, I think. I love writing witty romantic comedies as much as darker and heavier fantasies. Fantasy is often more challenging because of world building. When you write a contemporary story you don’t have to worry about explaining the world the characters live in. However in a fantasy you must do just that, you must build not only the actual physical world but also the culture, the beliefs, the customs. But this challenge is also what often makes it so much fun.

Apart from being a writer, you are also a teacher. How has the profession of teaching, influenced your writing? Would you ever consider taking up writing as a full-time job?

I became a teacher rather late in life even if that’s what I wanted to be when I was a little girl. But rather than my teaching influencing my writing, it was the opposite. The writing influenced my teaching. I am one of the few teachers who focus her instruction around writing. And yes, I would absolutely consider writing full-time. In fact, it’s a dream of mine but at the moment it’s not financially feasible.

Who has been your biggest support system in your journey as an author?

My family has always encouraged me to write since I was very young. I think they realized early on that writing was one of my strengths. There’s been other people who have helped me one way or another in my journey to become a published writer, but it wasn’t until the last 3-4 years that I could boast about an actual support system. It started with a small local writing group who inspired and cheered me on and other authors with whom I can talk shop or commiserate about the woes of a writer’s life.

What can we find you doing when you’re not writing or teaching?

Reading, watching shows on TV or movies, working on graphics and videos for my books. Because I have two full time jobs, I have very little time left for socializing like I used to.

Do you also enjoy reading? Which are some of your favourite authors and books?

I’ve always been an avid reader. When I was a little girl I’d read whole books in a day. I can’t do that anymore due to a lack of free time, but I read every chance I get (which is normally before going to bed or sitting in waiting rooms for doctors or other appointments). Just like I write across sub-genres, I also read across many genres. I read a lot of young adult literature, especially fantasy and paranormal stories. I love mystery and romance. I love the wit of Sophie Kinsella, the magic of JK Rowling, the lyrical tones of Maggie Stiefvater, the darkness of Suzanne Collins, or the mystery and nostalgia of Kate Morton. But there are so many more.

I’m currently working on book three of The Jewel Chronicles and I’ve been playing with the idea of writing the story of a sidekick in one of my other books, which will be a darker paranormal romance. But as of right now it’s just an idea.

Have brimming questions to ask author Natalina Reis? Ask the author whatever you like, but keep in the appropriate zone.
** Please note, unanswered questions will not appear on the page and refrain from posting promotional messages.

The author, a good book and you. Contact Natalina Reis here.
** No Spamming: Spam is an irritant to regular users or the authors. Please note that bombarding promotional mails/messages is strictly prohibited. Your IP address may be blocked if found doing so.