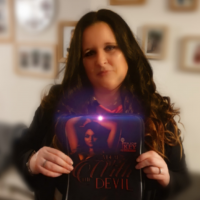 I'm Nicola Jane. I live in the UK, England, and write MC/Mafia romance. I live with my husband of 16 years and my two children.

I love to read, drink cocktails and write.

If you like my books, get in touch. I love to hear from readers :) 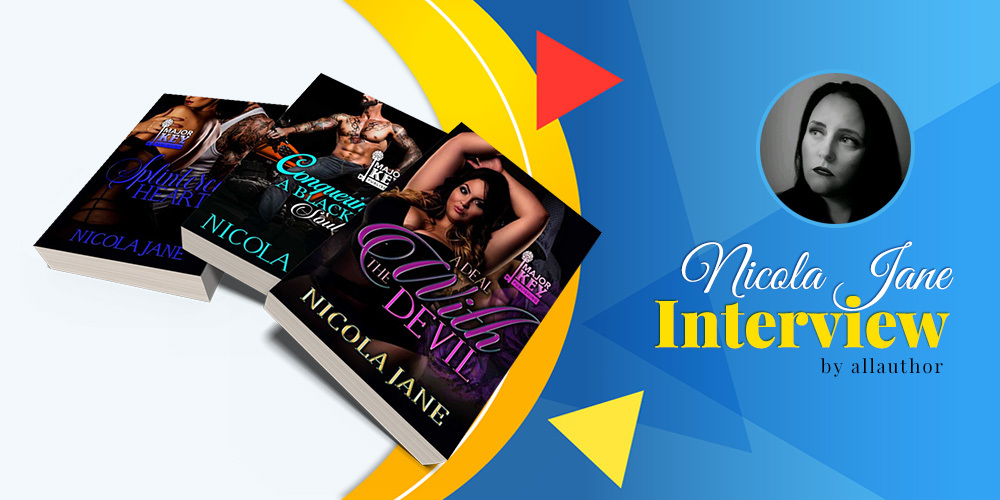 "Nicola Jane was born and raised in Nottingham, England, UK. She loves reading romance/erotica and so writing it came quite naturally to her. She loved writing about teen relationships and it was like living a fantasy life through her characters. She currently writing the second book for Splintered Souls. She pictures her character and his personality and then she googles names based on that."
Since how long have you been living in England, the UK? Did you meet your husband of 15 years in UK itself?

I was born and raised in Nottingham, England, UK. I met my husband here through mutual friends that set us up on a blind date! We’ve been married 15 years and we’ve been in a relationship for 16 years.

What do you love the most about writing romance/erotica? Why did you choose this genre?

I love reading this genre and so writing it came quite naturally to me. It started out because I’d often read a romance/erotica and think of different endings. I like drama filled stories and there doesn’t seem to be enough where the lead characters hurt each other, i.e cheating and heartbreak. Real life isn’t happy ever after and I wanted stories that reflected that.

When did you realize you had the talent to tell stories and wanted to become a writer?

When I was a teenager me and my friends would write stories and then read them to each other. I loved writing about teen relationships and it was like living a fantasy life through my characters. I stopped writing as I grew up but would often make scenarios in my head. Eventually it was a chat with my father that lead me to begin writing again.

What is something that most people don’t know about being an author?

That there is a lot of promotion involved that you have to do yourself if you want to make any money at all. I spend hours plugging my books and making posters online, it’s very time consuming but very necessary.

How many of your books have your children read? Do they have a favourite?

None I hope! (Cringe) They are still far too young to read my books although my 15 year old keeps asking me to write something he can read like and action/fantasy and I have tried but it just doesn’t flow the same.

What has been your most significant achievement as a writer till now?

It was when Major Key Publishing signed me to write for them!

How many more books are planned in "A Motorcycle Club Romance"? Which one is the next and what is it about?

I’m currently writing the second book for Splintered Souls. The first was about the club president, Cooper, and his relationship with his nephews nanny, Mila. The one I am currently writing is about the Vice President Kain and his love interest Harper. I am also starting to think of a third book in the series so watch this space.

Who inspired the character of Aiden Tremo? How do you come up with names for your characters?

Aiden came about from a reoccurring day dream that I had about guys and the banter they share with friends and what happens when that banter goes a step further. I picture my character and his personality and then I google names based on that. I can go through a lot of names before I find ‘the one’ but usually once I’ve found it I stick with that.

How would you describe your character, Alivia Caldwell from "Heart of Sin" in three words?

What are some things that haven't been done in the romance genre that you hope to introduce through your books?

I’m sure a lot of it’s been done but I’d like to see more heart-break and drama. I like the bumps in the road but I like the characters that stay and fight for what they want.

How was the idea for "Heart of Sin" born?

I was trying to step away from the MC romances for a while because I’d published three, one after the other. I literally sat down at the laptop and wrote whatever came into my head. Before I knew it the idea’s were pouring out.

If you could date one of your heroes from your books, who would it be and why?

Vass Fletcher from Heart of Sin. He’s rich and experienced!

Have you ever worked on multiple novels at once? What are you working on now?

I have but one always seems to then take over until I’m back to writing just the one again. It’s hard to write different characters without getting the books confused so I prefer to concentrate on one.

The second book in the Mc series for Splintered Hearts.

Amazing, I love the different tools that I can access to make promotional materials and I love that I can feature my books.

Have brimming questions to ask author Nicola Jane? Ask the author whatever you like, but keep in the appropriate zone.
** Please note, unanswered questions will not appear on the page and refrain from posting promotional messages.

The author, a good book and you. Contact Nicola Jane here.
** No Spamming: Spam is an irritant to regular users or the authors. Please note that bombarding promotional mails/messages is strictly prohibited. Your IP address may be blocked if found doing so.