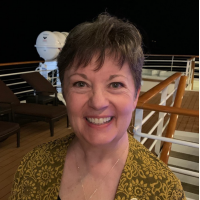 She's also written several laugh-out-loud comedies which have been produced in theaters from California to New York.

She loves writing, reading, and cooking. If you sign up for her newsletters, you'll probably find a few of her favorite recipes attached.

Pat is an incurable romantic and definitely believes in second chances and happily-ever-afters.

In fact, several years ago she found her own second chance! She and her composer husband recently moved from NYC to Largo, FL and are enjoying the sunshine!

Author Quote: "I value my life by how many people I help." 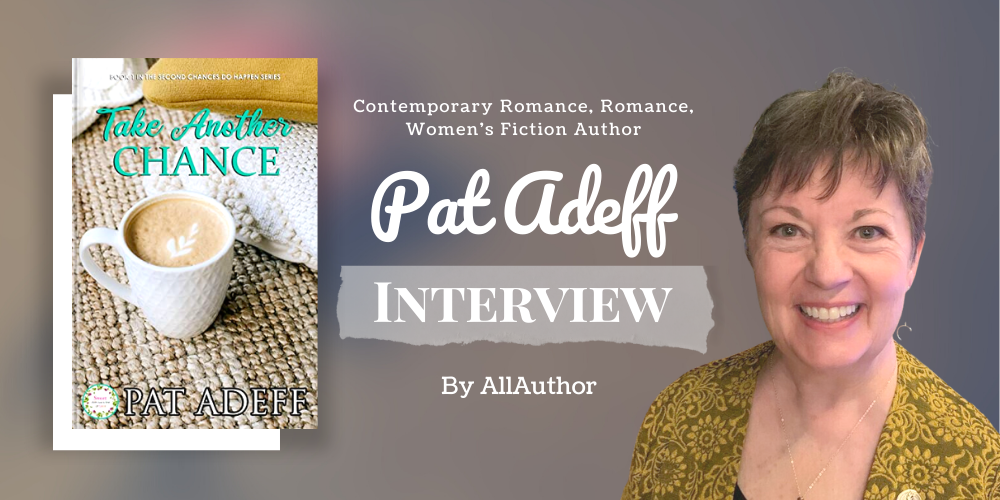 "Born in Redlands, California, Pat Adeff writes sweet romances about second chances and laugh-out-loud comedy plays. She wrote short stories and poetry starting in middle school. Her first full-length novel was called “Doctor’s Orders." She loves writing, reading, and cooking."
Where were you born, and what was your childhood like?

I was born on July 4th in Redlands, California. For 3 years, my parents convinced me the crowd at the fireworks display was all for my birthday, which gives you an idea of who my parents were! Needless to say, I grew up in a less-than-normal home. My parents met on stage during rehearsals for “Arsenic and Old Lace” at the Redlands Footlighters Theater. My brothers and I grew up in that theater; we’d do our homework at the theater if mom or dad were part of a production (which was pretty much all the time.) Both of my brothers are musicians. One of them was also part of a circus, flying trapeze. He later coached trapeze for the TV show, “Circus of the Stars.” Our back yard was filled with a full-sized trapeze and our living room was wall-to-wall costumes and props.

What was the first thing you ever wrote and was it good? Did you share it with anyone?

I wrote short stories and poetry starting in middle school. However, my first full-length novel was called “Doctor’s Orders.” It was a romance and I wrote it on paper with an electric typewriter. I thought it was pretty good. I gave my one and only copy to a co-worker to read and I haven’t seen it since! She moved and left no forwarding address.

I totally believe in second chances at love! I want to give my readers a feel-good story that just might give them hope for themselves. According to several reviews, I’ve done just that! That’s a great feeling as an author.

How has been your experience of writing several laugh-out-loud comedies?

It’s been great! Not only do the audiences leave the theater laughing, the plays are fun to produce, and the actors enjoy being in them. It’s an all-around win-win situation.

What makes you believe in second chances and happily-ever-afters?

One of my favorite quotes is from the silent-screen actress, Mary Pickford. I think this also applies to love. “If you have made mistakes, even serious mistakes, you may have a fresh start any moment you choose, for this thing we call ‘failure’ is not the falling down, but the staying down.” Also, I know it can happen – it did to me! After a painfully failed marriage, I gave up on finding someone to share my life with. A decade later, I read this quote from Ms. Pickford and something just clicked in me. Not only did I write Take Another Chance, but I have now been happily married to my new husband for 7 wonderful years. He is a composer and we’re currently co-writing a musical that we hope to see on Broadway!

How did you come up with the idea of your book, Take Another Chance?

At first, it was only a catharsis for me to help get over the loss of my marriage. But it grew into something bigger when my characters sort of took off on their own and wrote their own story! Although the heroine in Take Another Chance started off as me, she and the story grew into something completely fictional. The book is NOT autobiographical; I unfortunately never did date a cop hero.

On what theme are the books in "Second Chances DO Happen!" series based on?

Second Chances can happen for everyone. Whether it’s a new romance, a new job, a new home, or a new friendship, we all deserve second chances. This particular series, although romance, also deals with jobs, homes, and friendships.

What inspired you to write your book, To Heal A Heart?

My readers! After I’d published Take Another Chance, several readers wrote to me asking whatever happens to the supporting characters Cate and Dr. Coburn. That’s when this series was born.

How did you begin writing the "Second Chances DO Happen!" series?

This happened after I found out that my readers wanted to know more about the supporting characters’ romances. When the readers told me they wanted more stories, is when I decided to go full-time with my writing and just go for it. My next series is already underway and is called “Everyday Heroes.” So far, I have a paramedic, a restaurant owner, and a musician for heroes. I’ll be surveying people to get more ideas for more everyday heroes.

When you're running low on ideas, what do you do or who do you talk to for inspiration?

So far (knock on wood) that hasn’t happened. Ideas and inspiration are everywhere. I like to talk to people, and EVERY person has their own story. I’ve also found that when someone asks me what I do, and I tell them I write romances, they immediately tell me about a romance in their life! At first it was a little disconcerting to hear such personal stories from a brand new friend; however it’s now become commonplace for me and I LOVE it!

What is the significance of the title of your book, Mahi-Mahi Matrimony?

One day, my husband and I were on vacation in Aruba. We were sitting outside enjoying a coffee and people watching at the marina. I mentioned that one of my upcoming heroes should be a fishing captain of a boat like the ones in the harbor. Well, my husband replied with an addition to the story, and our conversation took off from there! After about 30 minutes of creating the story, we needed a working title. Out of the blue, Mahi-Mahi Matrimony sprung to mind. So, it was not only the working title, but is the title I published that book under.

What are your tips of penning a catchy and intriguing book title?

I like titles that speak to the heart. Although “Billionaire Boat Captain” instead of “Mahi-Mahi Matrimony” might sell a few more books because it has a keyword for romance in the title (and also might help Amazon’s algorithm a little better) I opted for the M-M-M alliteration instead. In just three words it says ‘happily ever after with a wedding’ AND it’s on an island somewhere with beaches. And who doesn’t love romances and beaches!

What's one dish you enjoy cooking the most?

I make a great pot roast! My secret is to use a large crockpot and slow-cook the roast for around 10 hours. I use organic, grass-fed beef. I add a can of organic mushroom soup, put the lid on, and walk away. 10 hours later, I sautée some organic squash and make a pot of rice. Voila! Almost instant dinner with almost no hassle. Hint: use a crock pot liner! It’s so much easier for the clean-up.

I’m putting the finishing touches on “To Heal A Heart” which is Book 4 in the Second Chances DO Happen Series. I’m working on the outline for “In His Arms” the final book in the same series.

I’m also finishing my first stand-alone holiday romance, which is coming out in November this year! So far, the title is ‘Christmas Cowboy” unless something better comes to mind.

And, of course, my husband and I are doing further work on our new musical, “Talent!”

How has been your experience to work with AllAuthor? What are some of the things you like and dislike about the site?

I love working with AllAuthor! In fact, you are one of the very first sites I found for advertising my books. AllAuthor is one of my mainstays to produce book sales. I like how easy it is to create an ad. You stay in touch on the ad, so I know what to expect. AllAuthor’s repeated Twitter posting are well-done and easy to retweet. Your book mock-up banners have gotten me some great feedback, too! The ongoing book cover contests are a great way to get more interest in my books.

What are some of the things I dislike about the AllAuthor site?

Mmmm… Hang on a minute. I’m thinking… Nope. Sorry. There is nothing I dislike about your site.

Have brimming questions to ask author Pat Adeff? Ask whatever you like, but keep it appropriate.
** Please note that unanswered questions will not appear on the page. Refrain from posting promotional messages.

The author, a good book and you! Contact Pat Adeff here.
** Please refrain from spamming and don’t bombard the author with promotional mails/messages. Your IP/Email address may be blocked if found doing so.