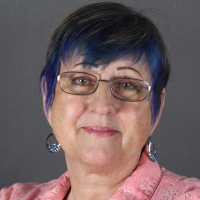 Patty Perrin, who writes under the pen name P.T.L. Perrin, grew up in Europe as a military brat and speaks several languages. She enjoys the diversity of people and their cultures. Her TETRASPHERE tetralogy was written for teens and young adults but is enjoyed by people of any age. 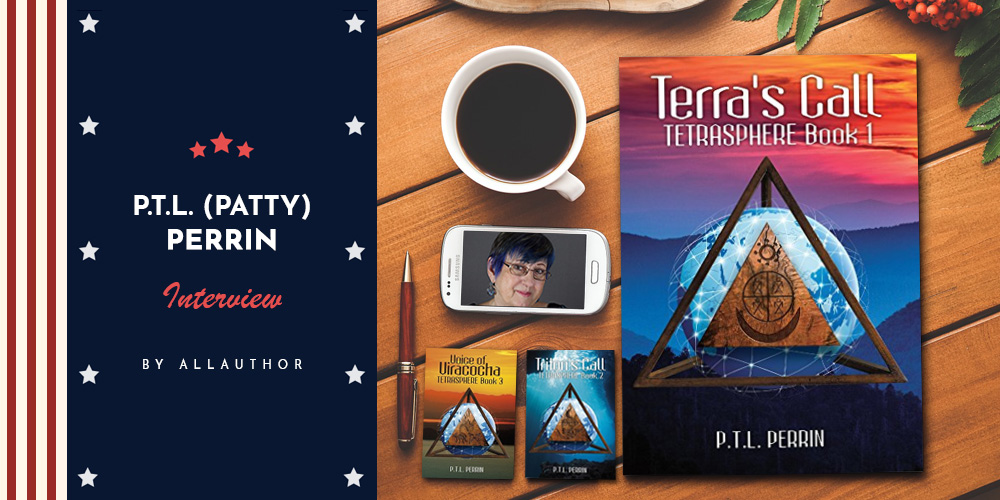 "Writing under the pen name, P.T.L, which means more to her than just her initials, is Patty Perrin. Speaking Spanish every time she tries to speak Italian, Perrin grew up as an army brat and had a childhood full of reading and exploring. Patty loves to travel and when she isn’t traveling, she likes to research on the odd places on our planet. Always wanting to have flown as a superpower, Patty has created some interesting and amazing characters in her books by taking inspiration from our mysterious planet. Having spent most of her life questioning the wonders of our universe, Patty has tried to find answers to them through her imagination and in her writing.

Always been a lover of Young Adult fiction, Sci-Fi and fantasy adventure genres, Perrin is writing the Tetrasphere spin-off as of now, while the final book of the Tetrasphere series, Terra’s anthem, would be released sometime in fall this year."


Your pen name is P.T.L. Perrin. Do you have a specific reason to use that name? What's the story behind that?

P.T.L. are my actual initials, but I first used them in my Inspirational/Devotional book REFLECTIONS OF A MISFIT, where they stood for Praise The Lord. They still mean that to me.

We know that you can speak several languages. Which ones are they? Do you plan on writing in any other languages apart from English?

I speak Spanish, German, and Italian; none fluently enough to write in them. I can get along in conversation, especially in the ones I’ve practiced often. I need to get back to Italy to refresh that language. Most of it fled to a specific drawer in my brain when I learned Spanish. Now everything comes out in Spanish when I try to speak Italian.

What was it like growing up as a military kid? How different do you think it is from the upbringing of a civilian's child?

As military Brats, my siblings and I were exposed to the German and Italian cultures by immersion, having gone to their schools and lived on their economy rather than on Post. The American schools we later attended had wonderful teachers and were culturally rich. We traveled all over Europe, which was common among Americans stationed there. Ethnic differences weren’t an issue among our friends. We learned to make friends quickly, and to say goodbye to them just as quickly. It made us flexible and unafraid of challenges. Traveling to foreign countries showed us that wonderful people live everywhere, and that language is a barrier that can easily be overcome. My children are civilian kids, but we’ve traveled a lot and some of them have married outside of our American culture. I have no frame of reference for kids who haven’t been exposed to travel and cultural diversity; to the excitement of going to an entirely new environment and to the pain of leaving beloved friends behind. When kids are forced to adjust because they have no say in where the military is sending their parents, they learn valuable life lessons.

As a kid, did you read a lot? Which was your favorite genre?

I read everything I got my hands on as a kid; from Lady Chatterly’s Lover to The Diary of Anne Frank; from Robert A. Heinlein’s Stranger in a Strange Land to Erich von Daniken’s Chariots of the Gods. I loved Shakespeare’s wit and word mastery, and the fantasy world of The Lord of the Rings blew me away. My favorite genre is still Young Adult Fantasy and Science Fiction.

What do you think about the shift in the reading trends from traditional paperbacks to E-books?

I love traditional books but traveling with a lot of books can be tiresome. I love my Kindle for travel. I’m not so sure it’s becoming an either/or choice other than for the sake of convenience.

You enjoy diversity of people and cultures. Which countries with rich cultural heritage have you explored? Which one is your favourite? Why?

We lived in Germany, where we played in the castle grounds in Heidelberg and Karlsruhe and explored the Black Forest, and we lived in Italy, where Venice was our weekend hangout and ornate villas and cathedrals dot the land. I’ve traveled to Greece with a pup-tent and backpack and camped out under a full moon on a beach, waking up surrounded by a flock of sheep. I didn’t speak the language, but people went out of their way to invite me to eat with them, or make sure I was safe traveling. I loved them all and can’t say that I have a favourite.

Do your children and grandchildren enjoy your books? Do they contribute in any way to your stories?

The names (altered a bit) of every one of our 22 grandchildren are in the Tetrasphere series, along with some children who simply call us Gramma and Grampa. The ones who are reading the series enjoy them, and so do their parents. One wrote a book report and made comments about my rich imagination. One granddaughter has posted a review. It makes me happy knowing that they’re reading and enjoying my books.

You've mentioned before how you grew up without television which led you to have a vast imagination. Did you allow your kids to watch TV? What effect do you think it has on children and their minds?

Our kids watched TV because by the time I had them, I was living back in the USA with my then-husband. Television wasn’t a priority, though, and I didn’t feel they experienced adverse effects. They spent plenty of time playing outside and reading. It’s different with our grandkids. Electronics, cell phones, tablets, video games – all pose a threat to their healthy development if they spend more time there than they do living and playing. Reading is, thankfully, still required in school, but reading for pleasure may be in danger of being set aside.

How much emphasis do you give on reading on your grandchildren? Which is their favourite book?

As an author, I talk to them a lot about reading and encourage it. Our grandkids range in age from four to twenty, so I can’t say which book is their favourite. However, I’m hoping my books will qualify.

What are your passions apart from writing? What did you originally plan to take up as a profession?

I love to travel, and when I can’t, I love to research the odd and interesting places on our planet. I love God and am constantly amazed at his incredible creation. He’s so much bigger than humans can begin to comprehend. Quantum physics may be touching on some of the concepts God used in creation, but we’ll never know the whole story, nor come close to knowing it. I am what I wanted to be when I grew up. Writing was not one of my original plans, but I’m happy it finally came to me.

What was your inspiration to write the trilogy- Terra's Call- TetraSphere?

Tetrasphere is a tetralogy, a four-book series. The final book, Terra’s Anthem, should be released this fall. My inspiration was my fascination with our mysterious planet and the strong possibility that aliens do live among us and that legends were based on truth. People exist who have gifts beyond the norm, and my characters were born out of research into some of these so-called paranormal gifts. Since God is extraterrestrial and supernatural, the rest is easy to accept as reality.

Your characters in TetraSphere have superpowers. As a kid, which superpower did you wish for? Why?

I always wanted to fly under my own power. I had frequent dreams where it felt natural to be flying, and I concluded that everything we dream, everything we imagine, is possible to achieve in some plane of existence, if not in this one.

Your books try to answer questions about the world, its existence and the creator of the universe. When did you first start questioning these things? How successful do you think you have been in finding the answers?

For as long as I remember, I’ve been questioning. As a child, I would look at the sky and feel homesick, longing for my home in the cosmos. I found it when I became a Christian, but the fascination remained. I’ve become satisfied in knowing that I can’t find all the answers, but I can imagine them, and who knows whether I’ve actually discovered them in my imagination? If it’s true that everything we dream or imagine is reality somewhere, then I’d say I’m successful.

Tell us about the next book that you are writing or plan to write. What genre is it?

The next book will be a spin-off from Tetrasphere. I introduce a new, exciting character in the final book, and I can see where she will be tasked with saving the world from a completely different threat. It will be another Teen/YA SciFi Fantasy Adventure.

P.T.L. (Patty) Perrin
It's the first book of a series that has all the elements of a great teen/ya scifi adventure story. In this book, they learn of their alien DNA and why they have their unique abilities. If they don't accept the challenge they're given, our planet Terra and all humanity will die.

Have brimming questions to ask author P.T.L. (Patty) Perrin? Ask the author whatever you like, but keep in the appropriate zone.
** Please note, unanswered questions will not appear on the page and refrain from posting promotional messages.

The author, a good book and you. Contact P.T.L. (Patty) Perrin here.
** No Spamming: Spam is an irritant to regular users or the authors. Please note that bombarding promotional mails/messages is strictly prohibited. Your IP address may be blocked if found doing so.