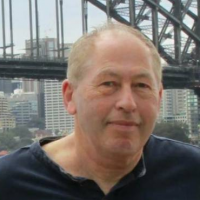 I live in Cambridge, England and am the author of six novels - Dream Cafe, The Engagement Party, Jack and Jill Went Downhill, Mid-life follies, The bench by Cromer beach and Nothing Man. I have been published by Headline Accent and Lume Books. My writing provides a male take on relationships, using humour and poignancy to describe my characters' tragi-comic journeys in search of love. I'm a member of UK Romantic Novelists’ Association and the Society of Authors. In addition to writing I play tennis and have a mild addiction to dried mango slices. 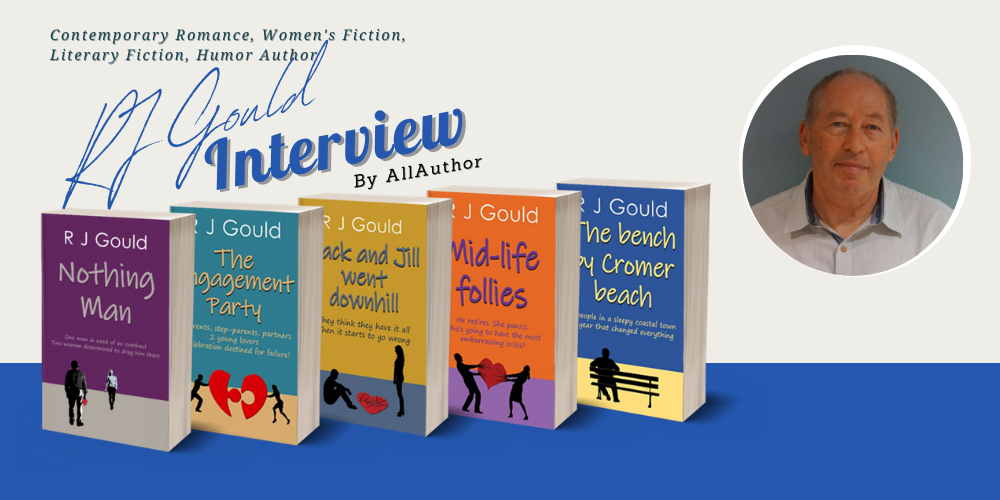 "Author of five novels, R J Gould wrote short stories when a teenager. He tends to mix humor and pathos in his contemporary fiction about relationships. He is also a member of the Cambridge Writers and Romantic Novelists Association. He enjoys playing tennis, watching films, especially film noir, supporting his partner's mosaic and glass art business. He has a minor addiction to dried mango slices."
Which is your favorite childhood memory?

Family trips to the seaside in England, my strongest memories being having to race back to the car when it started raining.

As a teenager, what were you obsessed with?

I read the old adventure story classics like Treasure Island and Gulliver’s Travels.

I wrote short stories when a teenager. I think my first was a strange one about an unkind man who is visited by the angel of death to inform him that it is time for him to die. Will the man change after the visit?

How did you think of the humorous elements added in the novel, The Engagement Party: A hilarious family satire?

The starting point was to set up eight very different characters – the parents, step-parents and partners of the engaged couple. I introduced the humor in writing about how they reached the week before the engagement party and then the events of the final week which pointed to a high chance of a disastrous celebration.

How did you come up with the title of your book, Jack and Jill went downhill?

Reading the nursery rhyme to a young relative it stuck me that a couple ‘falling down’ in terms of their actions and relationships could be interesting. After their falls, will or won’t their marriage succeed?

Who inspired the character of Neville Watkin in "Nothing-Man"?

I wanted to write about an older person who thinks that life has passed him by – he defines himself as a nothing man – then two women come into his life and set about turning him into a Something Man. I did have a person as a starting point – he will remain nameless!

I write about ordinary people’s extraordinary lives (because everyone’s life is both unique and extraordinary) so my ideal ambiance is an everyday location.

When I start writing I have no detailed plan of the plot, even the characters aren’t fully formed because I like them to develop as the plot moves forward. As a result, shower thoughts are important, I’m regularly thinking of ideas for my current novel.

What is the farthest you've ever gone to promote a book?

Now that I’ve switched from being published through a company to self-publishing, I have to do all the promotion myself. I spend a lot of time planning in depth advertising and other campaigns.

What kind of cultural value do you think reading and writing have/brings?

As a writer it’s an enjoyable, creative and rewarding activity. I tend to mix humor and pathos in my stories. I’m a reader too, of course, and with that hat on, I believe reading opens up whole new ways of thinking. I tend to seek realism rather than escapism in my fiction.

I suppose I’m lucky to be motivated, disciplined and devoid of writer’s block. I don’t write chapters sequentially so if I’m stuck on something I move on to another scene. I usually have one book at editing stage and one new novel so I can swap between them.

What percentage of your daily writing do you end up not using in published works?

That’s a good question. When I’m editing I ask myself whether a scene is simply clever or essential to the plot. Being clever alone is not good enough. Perhaps that cuts out 10 or so percent of what I’ve written.

What's next for you? What are you working on now?

I’ve started a new novel about three people who went to university 50 years ago, close friends who fell out. They are invited to a reunion and consider whether they want a reconciliation. The story is allowing me to cover culture and society in the late 1960s and present day. I’m focusing on how much people really change over their lifetime.

What are your thoughts on AllAuthor and its services?

Well done to AllAuthor for their work to support us authors. I’m impressed so far!

Have brimming questions to ask author R J Gould? Ask whatever you like, but keep it appropriate.
** Please note that unanswered questions will not appear on the page. Refrain from posting promotional messages.

The author, a good book and you! Contact R J Gould here.
** Please refrain from spamming and don’t bombard the author with promotional mails/messages. Your IP/Email address may be blocked if found doing so.