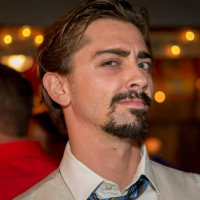 Let's cut to the chase. You read stuff. I write stuff. So, If you want to nab a few of my free Amazon Best Selling Urban Fantasy books to test the waters, go here: http://www.shaynesilvers.com

Now, let's talk about this specimen of a man named Shayne...

Shayne Silvers writes the "Nate Temple Supernatural Thriller Series" which features a foul-mouthed young wizard who rides a bloodthirsty unicorn, drinks with Achilles, and is pals with the Four Horsemen.

Shayne also writes the "Feathers and Fire" series, which features a young female wizard who hunts monsters for the Vatican, but you won't find her in church on Sundays. They say she's been kissed by Heaven - whatever the Hell that means...

You should really start reading about them. Over half a million people are already talking... 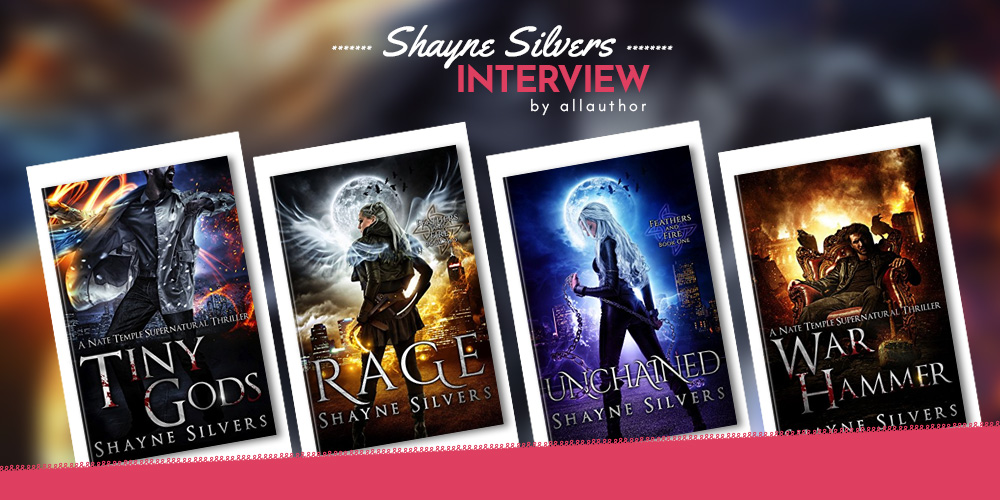 "Shayne Silvers has a wanderlust that he won’t admit to. Raised in the Midwest, he has Black belts in Taekwondo and Karate and has even won a pizza eating contest at one point in his life. He has always known he would end up becoming an author, but he worked at a community bank in Missouri because he knew his ambition would take time to realize. As a full-time author, his characters sometimes seem more real to him than the physical bodies he encounters in his life. He sees a lot of himself in his character Nate Temple and considers himself to be the character’s personal assistant. Writing from one character’s perspective for so many books makes it challenging to write villains with motives and reasons that readers can empathize with. His advice for new authors is to be authentic and to not write about topics just because they are currently popular, as this significantly affects the loyalty of readers."
Tell us a little bit about your background. Where did you grow up? What did you parents do for a living and were they always supportive of your writing career?

I grew up in the midwest, but have hopped the globe to live in London, Miami, New York City, Denver, Chicago, Los Angeles, and Kansas City. You could say I have a small case of wanderlust, but I won't admit to it... I'll probably already be somewhere else by then. My parents have always been business owners, and have encouraged me to pursue my passions at every juncture - never relying on a company to take care of my family long term, so I've always had a bit of the entrepreneurial attitude in me.

What would you say is your biggest non-writing accomplishment to this day?

I've achieved high ranking black belts in two different martial arts - Taekwon Do and Karate. Other than that, I think I won a pizza eating contest at one point in my life. I'm not sure which one I'm more proud of.

Did you hold any day-jobs before you became a writer or did you always known that you were meant to be an author?

I always knew I wanted to be an author, that I would be an author, but I also knew that my dream of doing this full time could take longer than I wished so I became a commercial loan officer for a community bank in Missouri. I did pretty well at it, but enjoy writing full time much more than dealing with angry bank customers.

As a writer or fantasy, do you believe that magic could exist in the real world? Why or why not?

I would LOVE for it to exist in the real world, and I believe that some form of what we may call 'magic' could exist. Look at the Eastern philosophies and the incredible feats they can accomplish through simple meditation and martial arts. Also, technology is kind of magical. It's only impossible to conceive until it's achieved.

If you won a "book oscar", who would you thank or give a shout out to first?

Secretly, I would thank myself because I'm selfish like that. Secondly, I would thank - profusely - the incredible support of my family, who for some bizarre reason believed I could accomplish what I had promised them I would when there was zero proof to support my claim.

Who was your inspiration for the character Nate Temple? Do you see a bit of yourself in him?

I definitely see a lot of the good and bad of myself in Nate. He is kind of my inner psyche - that voice that always tells you what you wished you would have said during a confrontation. He is also incredibly flawed, and helping him get out of his own way is more work than I thought possible. You could say I'm his personal assistant.

Do you sometimes find yourself forgetting that your characters aren't real people?

Absolutely. I spend so much time with them that they are very real to me. More than most physical bodies I encounter in my daily life.

When did you first start writing "Obsidian Son"? Looking back now, is there anything you wish you could change in any of your books if you could?

I wrote Obsidian Son in 2012, published it, and waited for 3 years to become an instant bazillionaire. Realizing that this wasn't going to happen, I focused on book marketing and getting it in front of the right readers. The book itself never changed - other than hiring a better editor - but getting it in front of the right people was harder than writing the book itself. And worth every hour of lost sleep.

How would you say your character Nate Temple has changed from book 1 "Obsidian Son" to book 7, "Wild Side"?

He starts off as an arrogant, silver-spooned, trust-fund wizard, and this was very intentional. I wanted to show readers a character who thought he 'had it all.' Then, with each book, I knock him down off his mountain of elitism and force him to become a better person. You could say that the Nate Temple series is about a man struggling to find himself - the man he should be, not the man he was born to be.

What are some pros and cons to writing from the POV of the same character for 7 books and counting?

I would have to say that working with the villains is the toughest part - imparting to the reader that the villain isn't usually bad for the sake of being bad. He has his own motives, which are generally something the reader can empathize with. Heroes with vices, and villains with virtues. Being stuck in only one character's head can make this difficult to achieve.

Why did you decide to write the Feathers and Fire Series? What do you think makes Callie Penrose so special?

The Feathers and Fire Series also takes place in the Temple Verse. The big picture scope of the story was simply too big for only Nate Temple to accomplish on his own. And bringing a female heroine into the series - writing as her - was something I always wanted to see if I could succeed at in an authentic fashion. Be warned, the Temple Verse has more series coming, because the conclusion is going to be huge - not even counting the estimated 20 books I have mapped out for both of the existing series.

What kind of research was involved while writing "UNCHAINED" and "RAGE"?

I live in Missouri, what many refer to as the 'Buckle of the Bible Belt.' I see both the good and the bad in this reputation, and I wanted to show a character that toes the line of what many consider to be 'right.' She is possibly more fun to write than Nate Temple. Well, that's a hard choice, but I'm having fun pitting them against each other.

What are your best research and marketing tips for newbie authors?

Don't duplicate. Don't chase trends for the sake of chasing trends. Too many authors do it, and most readers see through it. If you're only writing a vampire book because you hear vampires are in, you might have a good few months, but never loyal readers. They are your bread and butter. They deserve a lot more respect than that.

How did you hear about AllAuthor? What do you think of the website and its services?

AllAuthor is absolutely fantastic. I lucked out by having one of my covers nominated for your Cover of the Month contest, and have been hooked ever since. You help readers find new authors, and for that, you are Saints.

Have brimming questions to ask author Shayne Silvers? Ask the author whatever you like, but keep in the appropriate zone.
** Please note, unanswered questions will not appear on the page and refrain from posting promotional messages.

The author, a good book and you! Contact Shayne Silvers here.
** Please refrain from spamming and don't bombard the author with promotional mails/messages. Your IP/Email address may be blocked if found doing so.