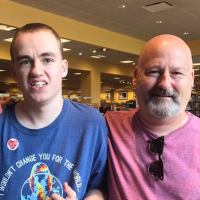 My autistic son, Michael, and I are a team. We write fiction with autistic characters. He inspires and I write. We hope to open minds about how those with disabilities are perceived through enjoyable fiction for kids and adults. I'm a retired middle school teacher, so writing is my new way of educating. 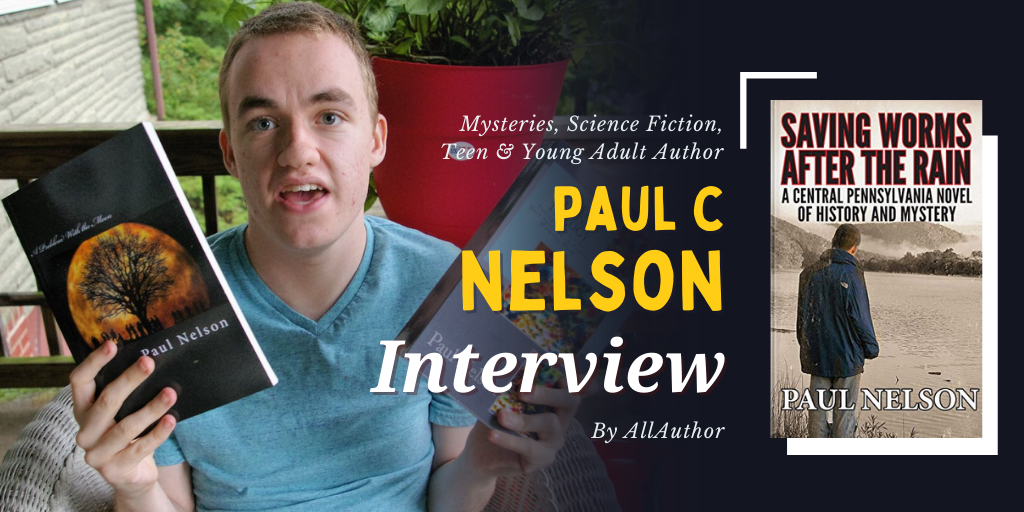 "Retired music teacher, Paul Nelson is a single autistic dad. His books are fun to read with a strong message of acceptance and being kind. His writing style pulls you in from the very first page. He works feverishly to produce thought-provoking and heartwarming literature that inspires, entertains and keeps the reader captivated. With every novel, Paul is trying to open minds about autism."
Where were you born, and what was your childhood like?

I was born in Iowa City, IA, but moved to Kentucky when I was very young. We later moved to central Pennsylvania. My childhood was happy and fairly uneventful. I did, however, have trouble fitting in with other kids in rural PA. I was an outsider, not popular at all. My favorite subjects in school were English, History, Music and Art. I also developed a huge interest in films. How were you first introduced to writing?

I was introduced to writing by my English teachers. The school district I attended had an excellent English Department. My favorite English teacher was Pat Eggleston. She got me thinking about writing. What have been your most valuable out-of-school learning experiences?

I worked in retail for sixteen years. I learned more about people and psychology during those years than anyone could learn in school. I would say the same thing about my other job. I taught music in the public school system for fifteen years. Do you remember the first book you ever wrote?

My first book was Fisher’s Autism Trilogy. I wrote it while I was still teaching. 5. How has been your experience of being a middle school teacher?

I enjoyed being a middle school teacher but became frustrated with the education system. There are too many administrators and politicians trying to tell teachers what to do. We need to let teachers teach. How difficult it is to write fiction with autistic characters?

Writing fiction with autistic characters is not difficult as far as coming up with ideas. People who are autistic have so many wonderful and amazing abilities it is easy to create great characters. The problems arise when dealing with some of the problems those who are autistic may have with words and communicating. It forces me to be extra creative. How does your son, Michael inspire you to write?

Michael is the inspiration for every autistic character I’ve created. In all of our books, there is a little bit of Michael represented in each character. What challenges did you face while writing your book, Cats of the Pyramids - Book 1?

Cats of the Pyramids will be an ongoing series. The real challenge was trying to keep the story interesting without giving away too much of what will be coming in future books. Were you a big reader as a kid too? If so, what were some of your favorite books then?

I wasn’t a great reader until high school. My favorite English teacher, Pat Eggleston, had us read some John Steinbeck. I loved it and read The Grapes of Wrath and Of Mice and Men. Those two books are still my two favorite novels to this day. I also like Truman Capote, Stephen King, (especially his short stories and novellas) C.S. Lewis and I read a lot of Buddhism and the spiritual works of Richard Rohr. How much did you research while writing your book, Saving Worms After the Rain?

Saving Worms After the Rain is our most popular book. I researched local history when we lived in central PA. I created the little town of Renfro, which is based on the real town of Renovo. This town had larger-than-life characters, including a legendary moonshiner named Prince Farrington. (He did descend from royalty.) Farrington supplied Al Capone with some of his best whiskey during Prohibition. He and his moonshiner friends ran the show for over a decade. I used the actual history of this area but rewrote it a bit. In addition, the bulk of the story deals with my late wife’s struggles with health, and her eventual death, as well as Michael’s life. So, there is a lot of autobiographical information in the book. What is the great question you do not understand from your childhood until now?

My greatest question in life is, and has always been, “Why can’t people show kindness to each other?” This is a theme in all of our books. What is the most challenging thing about sharing your own experiences with a large audience?

The greatest challenge for me in writing about our experiences is trying to convey to people that we live in a society that is an illusion of “what is normal.” There is no “normal.” We have to break out of the way we see those who don’t fit into what society perceives as “normal.” That illusion is the source of racism and bigotry of all types. (including bigotry against those with mental health issues) What makes you different from 99% of the population? And why?

I feel that what makes me different from most people is the way autism has molded my life for the past twenty-three years. Michael has taught me to look at everything with an open mind. I try not to judge others and I no longer sweat the small stuff as much. In short, Michael has shown me what joy is. What are some of your plans for the future? Are you working on a new project at the moment?

I intend to keep writing. I’m working on a real challenge right now entitled, “From the Moon, I Come in Peace.” It’s a memoir/novel told from Michael’s perspective. It also features a series of essays on autism and my goal is to address the issue of high suicide rates among the autism community. When were you first introduced to AllAuthor and how?

I think I found allauthor on either FB or twitter. I have been very pleased with it and I’d recommend the site to anyone who writes.

Have brimming questions to ask author Paul c nelson? Ask the author whatever you like, but keep in the appropriate zone.
** Please note, unanswered questions will not appear on the page and refrain from posting promotional messages.

The author, a good book and you. Contact paul c nelson here.
** No Spamming: Spam is an irritant to regular users or the authors. Please note that bombarding promotional mails/messages is strictly prohibited. Your IP address may be blocked if found doing so.