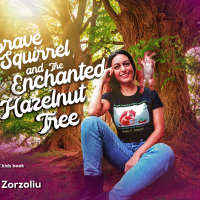 ”Magic is not just about things. Magic is inside us, too.” (Delia C. Zorzoliu)

He has written over 14 children's books, several novels and poetry books.

She is the author of stories such us: “The Brave Squirrel and the Enchanted Hazelnut Tree”, “Crystal Frog and Waterlily Fairy”, "The Crumb Monster", “The Fifth Season”, “Princess Quail and the Enchanted Corn”, “Sea Fairy and the Silver Dolphin”, “The Enchanted Goose Egg”.

Also, she is the author of novel ”Emerald earrings. Only one love, two lives.”

On the occasion of her debut in painting in 2021 with the exhibition entitled "Inspiration and the road", Delia C. Zorzoliu received the Diploma of Merit awarded by the International Art Center Romania. 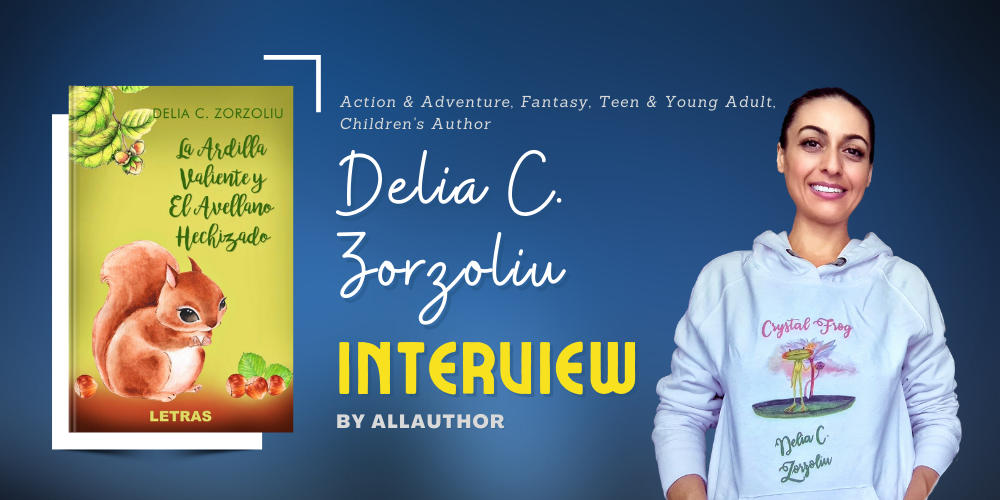 "Delia C. Zorzoliu is an author of children's books, adventure, fantasy, romantic novels, dramas. She was an avid reader as a child. She always wanted to have her own stories. She started writing her first novel in 2017. She always prefers to read the books first and then watch the movies adapted after them. She likes to create stories with parents, princesses, phenomena, and magical things."
How much time did you spend in Bucharest, Romania? Is there anything you miss about the place?

Lately I haven't spent much time in Bucharest, Romania, only a few weeks a year when I go on vacation there. I miss my family, my friends but also the beautiful places in my country.

There are many beautiful things I could talk about, but the most wonderful thing was that in adolescence I wrote a lot of poems in which I discovered after a long time that they actually hide my evolution as a writer, but also the experiences lived during the period childhood- adolescence-maturity.

Do you remember the first fantasy novel you read that made you think 'Wow! I wanna write about this too'?

There were many books that gave me the impetus to write a book myself, but I never wanted to write like the others. I always wanted to have my own stories. I like to be original and originality comes not only from the subject of the book but also from the way it is written.

I was an avid reader as a child. I started reading books, especially children's books, from the age of 7-8. I read so much like this that I lost their number. I still read them. I like stories, that's why my main type of writing is and probably will remain the children's book.

How much time did it take to write your first novel (from start to finish)?

I started writing my first novel in 2017. I finished writing it in 2020 because I had reached a point where I felt it needed a break for my ideas to take shape again, so better a year and a half he put it aside and I focused on other projects. This novel will be published this fall.

How did you come up with the title of your book, “The Fifth Season”?

Do you think hard copies of books are becoming obsolete with the advent of ebooks?

I do not consider that the hard copies of books become obsolete with the appearance of ebooks. I think both printed books and ebooks tell the same story. It's up to us, the readers, how we prefer to travel în the story.

I always prefer to read the books first and then watch the movies adapted after them.

Sometimes the translated version is not as good as the original ones. Did you ever regret translating any of your books?

It is true that the translated version of a book may differ from the original version but I have never regretted that I have translated my books into other languages, surely the story will remain the same no matter how it is presented.

If you had the power to bring any fictional character from any book or movie or TV series to life, who would it be and why?

If I had the power to bring to life any character from any book, or movie or TV series, I would bring Smurfs to life. I was in love with these characters from the first moment I saw them, I'm still watching them. For me, Smurfs have been and will remain my favorites. The way in which each character was constructed by assigning different features but also the continuous fight between good and evil make the Smurfs story classic but fascinating.

What are the best spots to take pictures in Southampton, United Kingdom?

In Southampton, United Kingdom there are many beautiful places where you can take beautiful pictures, especially in the central area of ​​the city, where the magnificent WestQuay is located, but also the Bargate that is a Grade I listed medieval gatehouse in the city centre. Was constructed in Norman times as part of the Southampton town walls and it was the main gateway to the city.

Which one is do you prefer - hardbacks, paperbacks, or eBooks?

I like all three but I prefer to have printed books, especially hardcover, in my personal library.

What would you do if you were a tourist and lost your phone and translation book?

If I were a tourist and lost both my phone and my translation book, it wouldn't be a problem for me. I would enjoy the walk and even if I got lost I would definitely find my way back to the hotel.

What is the next book you are looking forward to writing? What is it about?

The next book I'm working on is for adults. I left the children's stories aside for a while and focused on this book which will have an interesting topic and which, I hope, will be published in early 2023.

My experience with AllAutor was wonderful. AllAutor offers quality services, promptness and last but not least professionalism being attentive to the needs of each author. I can say that AllAutor has become my favorite platform in a short time. Thanks AllAutor for existing.

Delia C. Zorzoliu is a thinker and a doer. These are the quotes by famous personalities the author resonates with.

By dreaming you get to create a world full of hidden illusions and flaws.
Delia C. ZorzoliuInspirational Life 9

Magic is not just about things. The magic is in us too.
Delia C. ZorzoliuInspirational Life 8

The thought takes you where the soul seeks love.
Delia C. ZorzoliuLove 8

Have brimming questions to ask author Delia C. Zorzoliu? Ask whatever you like, but keep it appropriate.
** Please note that unanswered questions will not appear on the page. Refrain from posting promotional messages.

The author, a good book and you! Contact Delia C. Zorzoliu here.
** Please refrain from spamming and don’t bombard the author with promotional mails/messages. Your IP/Email address may be blocked if found doing so.