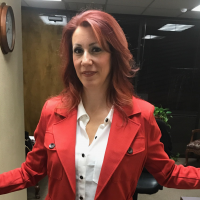 Dorothy F. Shaw lives in Arizona where the weather is hot and the sunsets are always beautiful. She spends her days in the real estate world and her nights with her Mac on her lap.
Between her ever-open heart, her bright red hair and her many colorful tattoos, she truly lives and loves in Technicolor!

Dorothy F. Shaw has earned excellence awards over time. Here is the glimpse of the accolades clinched by the author. 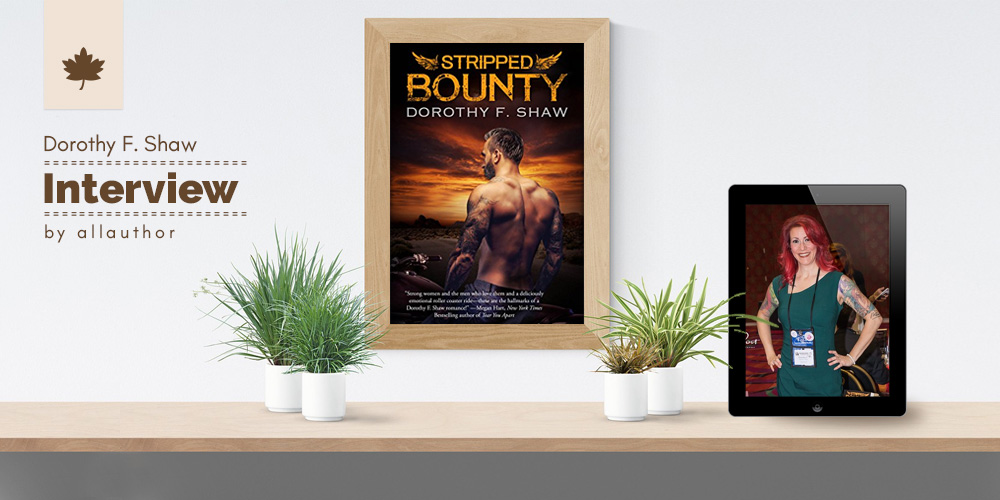 "Author Dorothy F Shaw grew up in Connecticut and remembers her childhood fondly with the memory of her father and playing with her cousins. An admirer of sunsets, Dorothy claims that Arizona, where she lives now has the best sunsets in the world. Enjoying fine dining, beer breweries, small towns and antique stores apart from writing, Shaw did not read much as a kid but tells that Walk Through Cold Fire, by Cin Forshay-Lunsford changed her in irrevocable ways. A mother of three working in Corporate America for over twenty years, and a full-time writer, she tries to manage everything to her best by creating schedules and being disciplined.
She wrote her first poem on a blog in 2009 titled ‘Inside My Head’, and has a three book series with Kensington’s Lyrical line called Arizona K9 coming soon and is very excited about it!"

Where did you grow up? What is your fondest childhood memory?

I grew up in Connecticut, and my fondest memories as a child either take place at my Grandparents home, playing with my cousins in the backyard, or with my father. My father was a long haul truck driver and I used to go on trips with him during my summer breaks. Best times were when he used to let me sit on his lap and steer that huge 18-wheeler. Now as an adult, I think he was nuts for doing that, but it was an awesome thing for me when I was little.

Living in Arizona, you have access to watching beautiful sunsets. Are you a fan of the sunsets yourself? What is your ideal setting to enjoy it?

The sunsets in Arizona are the best in the world. Unfortunately, being a mom of 3—2 of them still at home, a fulltime employee and then fulltime author, I don’t spend a lot of time gazing at the sunset. But when I do catch them, I always take a moment to just see it. Really see it, and how grand it always is.

Where did you go to college? What was your major?

I attended WestConn in Connecticut. My major was Justice and Law Administration, and unfortunately, I did not finish.

What else, apart from writing do you enjoy doing in your free time?

I enjoy fine dining. I enjoy craft beer breweries. I enjoy exploring small towns and antique stores. I also enjoy sleeping, because I don’t get to do that as often as I’d like.a

Did you read as a child? Which is your all-time favorite classic?

Oddly, I did not read much as a child—though I did have a copy of, The Velveteen Rabbit. I held onto that book for a very long time, but didn’t read it until I was an adult. I did read a bit as a teen though. Many VC Andrews novels that would be considered taboo today. And there was a YA book I read called, Walk Through Cold Fire, by Cin Forshay-Lunsford. That book changed me in ways that I still can’t adequately describe. It was my first look at a love story that didn’t have a happy ending. It was an epic story, out of print now unfortunately, but if you can find a copy online, it’s worth dropping the cash for it.

How many kids do you have? How have they inspired you to write?

I have three children. Age 27, 15 and 14. And considering I write adult romance books, they absolutely DO NOT inspire me to write. LOL

You have been working in Corporate America for about twenty years now. If you had to tell us one lesson that it has taught you, what would it be?

Biggest lesson: Never assume something is being done. I don’t know what I don’t know, so it’s always best to ask rather than assume.

What is the one rule you follow to make sure you are able to balance your corporate work life, writing, and your family time?

I try and always create a schedule for when to write, and I try really hard to stick to it. Keeping disciplined…well, it takes discipline. And that’s also hard.

The first post you made on your blog back in 2009 was a poem. What was its title and what was it about?

It’s titled: Inside My Head and it was written because at the time, I’d had a falling out with an online friend who I’d become close to, and I was struggling to sort out what happened and why I’d gotten so hurt/disappointed.

You also flaunt many tattoos on your body. Which one is your favorite and what is its story?

This is a really hard question to answer. I love all of my tattoos, and I don’t think any one is truly a standalone favorite. However, I will point out that the sleeve tattoo on my left arm is a mural and a full tribute to J.R. Ward’s Black Dagger Brotherhood series. And yes, she has seen it and graciously signed it for me back in 2011. One of the best days of my life!

What inspired the story of ‘Spare Hearts’?

I still can’t tell this story without giggling! I was on twitter and an editor from Forever Romance – Imprint of Grand Central Publishing – tweeted that she was bowling on a team and would love to see some more stories where the hero was in sports. Well, (a million years ago) I used to be a league bowler, and when I saw that tweet, I replied and told her: “But bowlers aren’t hot.” She of course replied and we went back and forth a couple times, eventually I ended up telling her that now I had to write a #HotBowlingHero just for her. So, when my then husband (TD Hoffman) came home from work, I explained what I wanted to write. He laughed at first but then started plotting it with me, and then I convinced him to co-write it with me. We laughed a lot and had a ton of fun writing that book! And yes, the same editor I was tweeting with is the same editor who contracted the book. It was definitely fate!

Which of the three books in the Donnellys trilogy do you find the most interesting? Why?

Ooh! Another hard question to answer. If I absolutely have to pick, then I would choose Defensive Heart because the heroine, Sonja, is wholly flawed and she must work through some major, life long emotional baggage in order to get her happy ending. Also, just an aside: The Donnellys is a series not a trilogy. There are future books coming. Book 4 is already written. Book 5 is plotted and ready to be started. Hopefully, there will be at least 7 books in total, (maybe more,) by the time I’m done telling you about this family and their lives.

‘Yes, Darling’ was written in the horror genre. Have you ever experienced anything paranormal in your own life?

What an interesting question! I actually have experienced a few things over the years that could be considered paranormal. Aside from those couple rare occasions, I don’t have the ability to see or hear ghosts like some people do. However, I’ve been told that I have a very bright yellow energy inside me, or emanating from me, and because of that, spirits surround me almost constantly. Maybe it’s a good thing that I can’t see or hear them then?

I have a three book series with Kensington’s Lyrical line coming soon, called Arizona K9! The first book, Avoiding the Badge, releases September 4th. I’m currently writing the 2nd book, Redeeming the Badge, and it should be out sometime just after the New Year, 2019. The 3rd will follow probably next summer. I’m very excited about the series for sure!

Have brimming questions to ask author Dorothy F. Shaw? Ask whatever you like, but keep it appropriate.
** Please note that unanswered questions will not appear on the page. Refrain from posting promotional messages.

The author, a good book and you! Contact Dorothy F. Shaw here.
** Please refrain from spamming and don’t bombard the author with promotional mails/messages. Your IP/Email address may be blocked if found doing so.