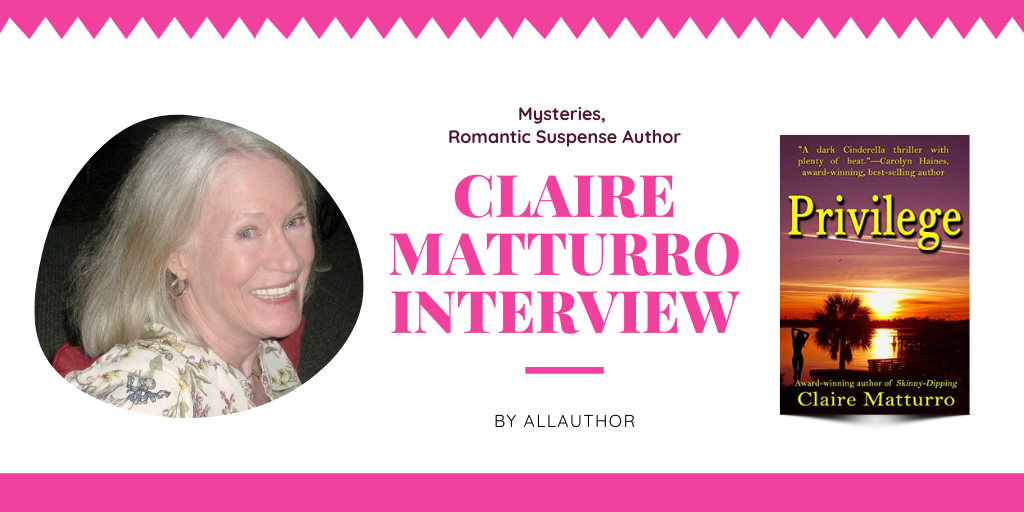 How did you chance upon writing as a career?

Prior to turning to writing fiction, all my prior careers involved non-fiction writing in some form, especially my days as a print journalist. Even as a lawyer, much of my work involved researching and writing appellate briefs for state and federal courts of appeal. My father was a newspaper man, so maybe I was just following in the footsteps of someone I greatly admired when I became a journalist. As for fiction, I was drawn to reading novels and writing short stories as far back as grade school, so perhaps it was a natural, inborn desire to write. I also come from a long-line of people gifted as oral storytellers so that gene was in me too.

After being a journalist in Alabama, a lawyer in Florida, an organic blueberry farmer in Georgia, and teaching at Florida State University and University of Oregon, how did you end up being a romance writer?

Well, I do not consider myself a romance writer, but rather a mystery writer who often has a love-story within the framework of a mystery. I prefer to read (and write) mysteries that have an analytic quality, and which can also teach me something new—and of course, have accurate details about police work and such. I started reading mysteries as a kid with the Bobbsey Twins, Hardy Boys, and Nancy Drew series. By my early teens, I was reading John D. McDonald, who is the godfather of the popular Florida mysteries subgenre, and other more mature mystery classics. To this good day, mysteries are my favorite genre to read so it made sense for me to write in that genre.

What are the benefits of Organic Farming? Are you able to use organic or sustainable principles on the farm?

We still own the organic blueberries, but a friend is running the operation now,and it is small, just eight acres, but you would be surprised how many blueberries one can get off that. And, yes, absolutely we did use only organic, sustainable techniques, and our friend continues with good organic practices too. Organic farming is critical to the long-term survival of the environment as the current mega-farm and corporate farming, also called “strip farming,” used in large, non- organic farming erodes the topsoil, puts toxins in the environment, and gives rise to pesticide-resistant insects. The use of chemical fertilizers is not sustainable in the long run and in the short run leads to run-off into natural water ways which contributes to algae blooms which choke fish and flows ultimately to the Gulf of Mexico, contributing to red tides. It’s very complex, but there are a lot of books and materials which can explain it in far more detail. I would refer readers who want to enjoy learning about organic farming in a fictional (though accurate) format to read Barbara Kingsolver’s Prodigal Summer, and to do some research into organic farming.

How would you describe your experience of teaching at the Florida State University and University of Oregon?

Wonderful! It was a refreshing and energizing experience, and I learned a good deal from my students as well.

What kind of research did you do, and how long did you spend researching before beginning the book, "The Smuggler’s Daughter?"

That’s almost a dangerous question because I could go on and on about my research, which I really enjoy. For The Smuggler’s Daughter, I did extensive research over many years while I was also doing other things. Part of the story is loosely inspired by a real-life event in Florida’s troubled history as a drug smuggling state. The tragedy, dubbed the “Sinkhole Murders,” involved the killing of four people who interrupted the offloading of a fishing boat’s cargo of “square grouper,” (i.e. marijuana). Their bodies were dumped into a sinkhole. Eventually a host of people were arrested, tried, and convicted. I read the trial transcripts, interviewed a reporter who covered the story, read every newspaper article on the event I could find on Westlaw and Lexis, read part of a police file on the investigations, and, in short, became somewhat obsessed. Barely a third of the story relates to the Sinkhole Murder, but I wanted to get the details, the motives, and the sense of it authentically created, albeit in a highly fictionalized way.

How did you begin writing the Lilly Cleary Series? Did you plan in advance to write 4 books in series?

No, I didn’t plan to do a series, but that was what HarperCollins wanted after an editor read the first manuscript. When a big publisher like HarperCollins wants a series, it’s a fabulous opportunity and therefore I wrote a series. I started writing the first Lilly Cleary book shortly after I stopped teaching at FSU and I had a strong idea of the story line, the main character, and setting, so I just plunged right into the project.

Apart from your own, which story is your favorite in "The Trouble with Cupid? Anthology of short stories concerning Trouble, the black cat detective."

I like them all because they are escapism, romantic suspense and are all well done within the confines of a short story and the genre. It’s such a fun experience working with all the other writers in the anthology and writing a short story with a cat’s point of view in it.

Which is your funniest memory from being a journalist in Alabama?

Well, let’s see—maybe the time I covered a simulated bomb training exercise with the local police and got my words accidentally mixed-up and wrote a headline about the police stimulating a crowd with their bomb play. Or, meeting Chip Carter, Jimmy Carter’s son, during the Carter campaign of 1976 and all the teasing I got because he flirted. I will say, he was cute!

Who inspired the character of Lilly Cleary? How do you come up with names for your characters?

Lilly is a composite of many attorneys I worked with over the years, including a couple of my male law partners. I made her female but kept some of their traits and actions, and just imagined her physical appearance and personal history. As for names, I put great thought into the names and try to aim for names which reflect the character’s history or personality. Hence, because she was Southern where double/triple names are popular, Lilly Belle Rose has the three names. Also, it’s important to pick distinct names so readers can keep the characters straight. On several occasions I have resorted to studying a phone book for names or lists of “most popular name” of year character was born.

Right before my first book, Skinny-dipping, was released, a newspaper on the East Coast of Florida ran a scathing, vitriolic review that personally attacked my editor at HarperCollins and me. It was inappropriately personal. It’s fine for a reviewer not to like a book, but negative reviews cross the line when they attack the author and editor as this one did. I was terrified that all the review would be equally bad as this was the first review. But after that, great reviews with a lot of high praise were published in newspapers throughout the US, and I relaxed. My grandmother told me once that a “lady does not dignify an insult with a response,” so I did nothing about the ugly review. Best compliment, you ask? Right off the top of my head, I’d say a comment in a Library Journal review of Bone Valley which compared me to Janet Evanovich and John Grisham.

What are you trying to achieve through your writing? How far off do you think you are?

Primarily entertainment, but in each book I sneak in some lesson. Bone Valley is my environmental novel, for example. And Sweetheart Deal addresses the abuses in the wild animal smuggling trades. The Smuggler’s Daughter is very accurate and contains a good bit of Florida history as well as some environmental information. How far do I think I am in achieving my goals? Who knows? Maybe my readers have to tell me that.

Being a Romantic Times book award winner, what are your top 5 writing tips?

1) Write what you know, or do extensive research including interview people who know what you need to know so your story will be authentic in its details. 2) Join a writers’ critique group for support and feedback and understand that extensive editing is a vital part of the process which critique groups can help with. 3) Write. Write. Write. 4) Read. Read. Read. Analyze what you read and learn from great books what works and what doesn’t. 5) Understand that inspiration will only take you so far and that writing is hard work and you must persevere. In other words, be persistent. Or, more concisely: 1) research carefully; 2) write often; 3) edit thoroughly; 4) read extensively; and 5) persist faithfully.

What are you working on now?

Wayward Girls, a boarding school story that a co-author, Penny Koepsel and I wrote is the next big project. Red Adept Publishing has purchased the manuscript, and Penny and I are waiting to do the line edits for a 2021 publication. This is a story near and dear to both Penny and me because it is based (loosely) on our own experiences at a Florida boarding school and also upon a deadly incident at a wilderness school in Texas. It’s fictional, but a cautionary tale to adults who trust their children and teens to the care of others as so many abuses are still occurring and so often the kids are not believed. In fact, our working tagline is: “No one believed them. Then it was too late.”

Oh, excellent. I recommend AllAuthor to my author friends all the time. I am all but addicted to your make-a-GIF tools, and I appreciate all the things you offer. The cover contests are always a lot of fun too.

Award-winning author Claire Hamner Matturro writes delightful mystery with plenty of plot twists and turns. An honors graduate of The University of Alabama Law School, she became the first female partner in a prestigious Sarasota, Florida law firm. Claire Matturo's fast-paced thrillers are full of plot twists and secret pasts that will glue you to her pages. 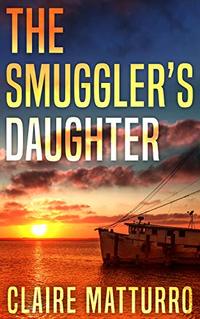 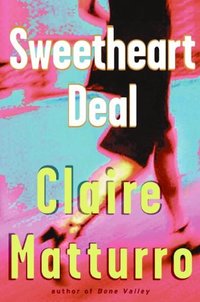 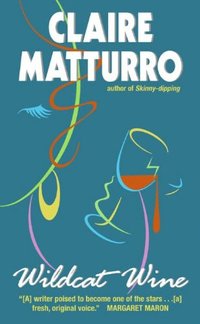 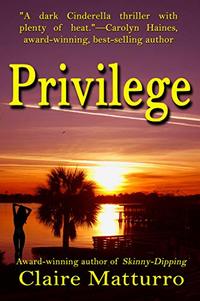 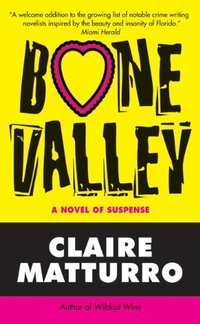 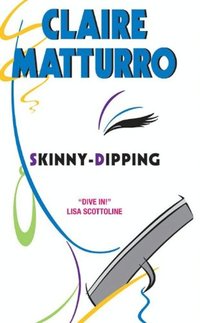 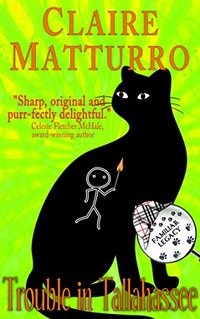