Blue Saffire is a housewife with too much time to think and not enough time to herself. By some miracle, she has found the time to write books. Blue represents the secret author inside that some of us are too scared to let out.

Blue is a loving wife, who is itching to make her way back to city life. The burbs are not enough background music to the story of her life. Life throws Blue challenges daily and since her diary is no longer enough, she has decided it is time for a new outlet. Thus, you are gaining access to the mind of Blue Saffire.

So here in lays the thoughts of Blue Saffire, the author, the wife, and the woman. Enjoy. 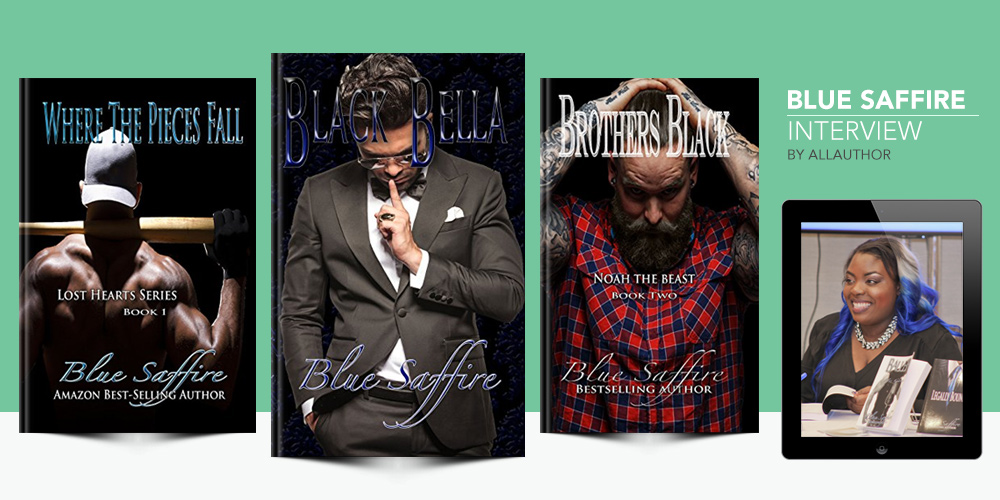 "A native of Far Rockaway, NY, author Blue Saffire always wanted to write about the opposite of where she grew up. She believes that her experiences, like living with her aunt and going to Catholic school influenced her writing more than where she grew up. Since Blue's mother was a paraprofessional for the New York Department of Education, she was reading and writing by the age of two. Her first ever publication was under her Evei Lattimore pen name (Black Bella). She puts a piece of herself in every book and her goal is to give each of her characters their own voice and personality. Her advice to other authors is to keep your eyes on your goals, focus on your books, and be you because "You don’t have to be anyone else.""
Where did you grow up and how do your think it has coloured your writing?

I grow up in Far Rockaway, NY. I don’t know if I can say where I grew influenced or colored my writing. If anything, I wanted to write about the opposite of where I grew up. I spent two years in Ranson, West Virginia, living with my aunt. That experience was so different from where I spent most of my life. I think that was a big part of my journey to understand that there’s more to life than the little slice of existence you are introduced to as your initial community. I think experiences like going to catholic school for two year, moving to West Virginia, and then returning to NY public schools, shaped me as a person, which ultimately shaped my books. Not so much where I started and did most of my growing up.

When did you first realise your gift for writing? What was the first story you ever wrote and was it any good?

I love this question. My mother was a paraprofessional for the New York Department of Education. She believed in education, which lead to me reading and writing by the age of two. My mom gave me notebooks, pencils, and chalk to write with. A blank surface was my friend. I started writing songs, poems, and stories at a very early age. Words were my first love. I don’t remember the first one I wrote. I’m sure it was good to me. LOL

If you were someone else, which of your books do you think you would enjoy the most?

Oh, wow. Each one is so special to me. Although, I think I would enjoy Where the Pieces Fall, from the Lost Hearts Series. Nicole and Caleb hit a sweet spot in the heart. They are not your typical hero and heroine.

What was the first book you ever published and if you could go back in time, would you change anything about it?

The first book I ever published was under my Evei Lattimore pen name. It was actually, Black Bella, and I have gone back and change it. LOL

When did you first start writing the Black Bella Saga? Where did you get the names "La Marcello" and "Boticelli"?

I started writing Black Bella in 2009 after having a Dream about the characters. Their names stuck in my head. I guess you can call it divine intervention. It was only after looking up the meanings of the names that I realized they fit perfectly.

Would you say that the first book in this series is a more modern retelling of Romeo And Juliet? What kind of impact do you hope this book will make?

I never thought of it like that, but I guess it could be, in a way. I have so much more I plan to do with this series. I hope that by the end of the Saga, readers will see two young lovers that grow into adults that learn to deal with a whole lot being thrown at them, without losing themselves or their love for each other, even when it seems all is lost.

What inspired the Brothers Black series? So far, have you had more fun writing Wyatt or Noah's story?

I wanted to write seven bad boy brothers that each had their own personality, but were fierce about their family and the women they love. I think I’m having fun with the entire series, not one book in particular. I still know all of their secrets, the things the readers are waiting to find out.

What other brothers' stories do you have left to tell? What are some things that we can expect from the next installation?

I will be telling the stories of the remaining five brothers. Toby’s book with be released in December 2017. I think in his book you will find that nothing is what it seems. Everything is done in the name of love and to protect. A lot will begin to make sense, but as always new questions will arise. I think book three will give more insight to some of the brothers, to draw you into the family just a bit more. I will be completing the Brothers Black Series in the begin of 2018, before moving to the next series. So book three will be preparing everyone for that. I’m excited about it.

What separates your books from the others in the romance genre? What is one cliche in this genre that you hope will die out?

It is my goal to give each of my characters their own voice, their own personality. I believe I’ve done that so far. I also think that the hooking, looping, and waving of my series, characters, and storylines offers something unique. It is not an easy task to link seven series across. LOL. Readers say that they are amazed by it. So am I, when I finish another book and can say, phew. LOL

When can we expect the second book to the Lost Hearts series? Will you continue the story of Caleb and Nicole or narrate someone else's tale?

Ah, I love this question as well. The next book in the Lost Hearts Series is actually about Trevor Monroe, Bradley Monroe’s brother from Ballers book one. Caleb and Nicole will appear in Trevor’s book. As Trevor’s book sets up Ballers book 3, which is Cameron’s book, Caleb’s twin.

What do you think characterizes your writing?

I put a piece of me in every book. It’s fiction, but it comes for parts of me. My books have serviced to heal me one word at a time. It is my hope that my writing does that for others. My writing is healing through words and love.

What was the toughest wall you had to break through to become a full-time writer? What advice do you have to offer other authors going through similar experiences?

I don’t think I’ve looked up long enough to see any walls. I’ve been plugging straight through, one word, one book, one publication, at a time. The rewards have been greater than the whispers of negativity, other’s perception of what I can and can’t do. My advice to other authors would be keep your eyes on your goals. Focus on your books. Choose what’s important to you and focus on that. Not anyone else’s rankings, reviews, how fast they publish. None of that stuff should matter to you. You are you, be the best you that you can be. You don’t have to be anyone else.

Where do you see yourself 10 years from now? Do you think an author could ever retire?

Oh, I don’t know about anyone else, but I don’t think I will ever retire. I have so many stories inmy head. So many more to come. My goal is to live a healthier life so I can live to tell as many of them as I can before this life is over. In ten years, I believe I will be a woman of many hats and hands. Blue Saffire has a mark to make on the world and she is on a mission to do so.

Have brimming questions to ask author Blue Saffire? Ask the author whatever you like, but keep in the appropriate zone.
** Please note, unanswered questions will not appear on the page and refrain from posting promotional messages.

The author, a good book and you! Contact Blue Saffire here.
** Please refrain from spamming and don't bombard the author with promotional mails/messages. Your IP/Email address may be blocked if found doing so.