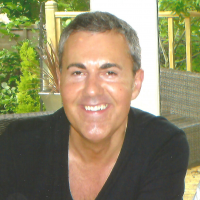 I was born in Huddersfield in England where I have lived for most of my life. I've always enjoyed writing, but I actually worked for many years in Mental Health. Since I retired writing has become my full-time occupation. My fictional book genres are humour, paranormal-supernatural-historical-fantasy, mysteries, and fashion fiction.

I don't write horror as such, my books tend to revolve more around the paranormal, hauntings, history, and the mysterious with some humour, so you won't find a lot of blood and gore.

My eighth book has just come out worldwide on Amazon, 'The Fabulous Life of Patrina Fletcher', which is about a social media and reality TV star. She made several appearances in my book, The Psychic Agency, she's great fun and very '2019'.

I'm now working on book six in my 'Ghost from the Molly-House' series, 'The Sirens Call' which should be out early next year on Amazon. 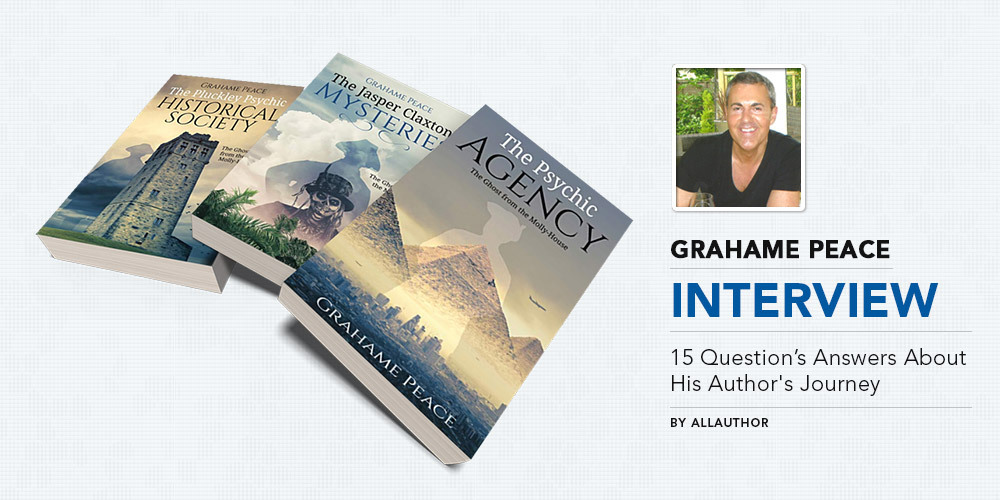 "Most of Grahame Peace's writing had been for work reports and academic assignments, which he enjoyed, so once he retired, which is around five years ago now, he thought he would try to develop his skills as a writer. He treats his writing as a very demanding full-time hobby. His book titles come to him as he writes the stories, he does start with a title, but it usually changes as the story develops. He hopes his writing will make people smile, and at times shed a tear."
Which is your favourite childhood memory while living in Huddersfield in England?

My childhood was not a happy one, so I find that a hard question to answer, honestly, all I can say is my childhood in Huddersfield taught me some valuable ‘life’ lessons.

Most of my writing had been for work reports and academic assignments, which I enjoyed, so once I retired, which is around five years ago now, I thought I’d try to develop my skills as a writer, I’ve always enjoyed reading and telling stories, but it’s been a big learning curve and I’m still learning. I treat my writing as a very demanding full-time hobby.

How would you describe your experience of working for many years in Mental Health?

Good question! I did it for 36 years, it was both rewarding, and at times gruelling, it certainly opened my eyes to the many social problems there are in the UK, along with drug and alcohol problems, and the impact this can have on people’s mental health and wellbeing. It made me appreciate many things in my own life; it made me realise I had many things to be thankful for. But it did take its toll on me emotionally, you see a darker side of life. I very much admire people who work in the profession, it’s a very difficult and often thankless job.

What is the one most important thing you are trying to achieve by your writing?

I want to entertain people; I want to take them on a journey, a journey that might trigger an emotion, a memory, a feeling or feelings. I hope my writing will make people smile, and at times shed a tear.

What is the story behind the idea of ‘The Pluckley Psychic Historical Society'?

This is book three in my ‘Ghost from the Molly House’ series; these books are all based on historical fact, which I mix with fiction and fantasy. Pluckley is a real place in the UK and is regarded as the most haunted town in England. This book has two stories, one based in Pluckley, the other based in my home town of Huddersfield and at a place called Castle Hill. The stories involve real historical events along with the paranormal and supernatural; they are told with humour you won’t find a lot of blood and gore in my books.

When building new characters, what sort of things do you establish first? What do you consider last?

Because ‘The Ghost from the Molly-House’ is a series (I’ve just finished book five The Mystery at Winterburn Manor coming out late June on Amazon) the characters have developed over each book, and I love them all, they are all somehow a part of me. I start with a basic idea, it might be based on someone I know, a character in a TV show or a film, and it builds from there, one character might be several people I know, and then I guess there are many subliminal influences.

The Psychic Agency is based in London, England. Why did you choose that as the setting for your book?

In all honesty, it makes it easier for me, I have written stories based in other countries, but because I don’t always know them, it requires a lot of extra research. But London is a great place for paranormal, historical fiction because it has so much real history.

What are some new ideas and writing techniques that you explored in the book "A Journey into Fashion: The Dressing Room"?

This book is very close to my heart; it covers a forty-year period and follows the life of Chris, a shy, naïve young man from the North of England. The story is told from his point of view, all his hopes, fears, and dreams, it’s a touching, amusing, coming of age story. The book explores some dark times in his life, but I’ve tried to tell them with some humour, there is a lot of humour in the story. Of course, it also includes many of the big fashion names, but is not set in London, Paris, Milan, or New York, but I think I’ve made it work.

Who inspired the character of Jasper, the time-travelling super-ghost in "The Jasper Claxton Mysteries"? How do you come up with character names?

I’d read a book by the American writer Rictor Norton who had done a tremendous amount of research about life in 18 th century England, the idea for Jasper came from there. I wanted to create a character who had experienced a lot of hardship and who wouldn’t judge people based on their status, gender, political or religious believes, the colour of their skin, or sexual persuasion. He judges people purely on how they treat him and others, he has a great thirst for justice and doing the right thing, but he also has a wicked sense of humour. I didn’t want to do a traditional ghost story, Jasper has all sorts of powers, yet he’s also vulnerable, someone said to me he’s the sort of person you’d want to have as your best friend, and I like to think of him that way. In terms of his name, I researched names from the period and came up with Jasper Claxton; I think it suits him.

How important do you think a book title is? What are your tips of penning a catchy and intriguing book title?

My book titles come to me as I write the stories, I do start with a title, but it usually changes as the story develops. I think with books; there are so many factors, it’s a very competitive, overcrowded market, it’s hard to get visibility, even with a great book cover and a catchy title.

The Beauty Room is a feel-good book full of humour, brimming with intrigue, and full of adorable characters. What inspired the plot of the story?

A character called Barbara Day, a beautician from ‘A Journey into Fashion’, I loved writing her character, so I decided to tell her story. It starts in 2002 at a prestigious beauty awards ceremony in London and then goes back to 1950 and how it all started for Barbara in my home town of Huddersfield, there are some great female characters in the book.

Have you ever been approached by fans on the street? What's the nicest thing a fan has ever said to you?

No, I would love for that to happen. In terms of feedback, people seem to love Jasper, which is great, but I’d like more people to get to know him.

What are your plans for the future? Where do you see yourself as an author in 10 years time?

I plan on hanging on in there for the long haul, I already have the idea for my next book, which is going to be about a social media and reality TV star called Patrina Fletcher, she makes several appearances in my book ‘The Psychic Agency’, she’s great fun.

What are a few things you wish someone had told you when you first became a writer?

The difficulties and challenges of marketing successfully on a limited budget, I’ve tried many things, but it’s a nut I’ve yet to crack.

Have brimming questions to ask author Grahame Peace? Ask the author whatever you like, but keep in the appropriate zone.
** Please note, unanswered questions will not appear on the page and refrain from posting promotional messages.

The author, a good book and you. Contact Grahame Peace here.
** No Spamming: Spam is an irritant to regular users or the authors. Please note that bombarding promotional mails/messages is strictly prohibited. Your IP address may be blocked if found doing so.