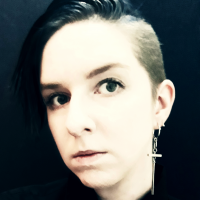 JC is the French-American author of fantasy, dark fantasy, and romance novels. A world traveler who has lived in several countries, JC enjoys diversity and intercultural exchange. JC particularly likes the elegance of the Victorian era as a background for their novels, and likes to portray unique characters who do not follow the same path as everyone else. Love and adventure must go hand in hand in all of JC's novels - live life with passion or not at all! 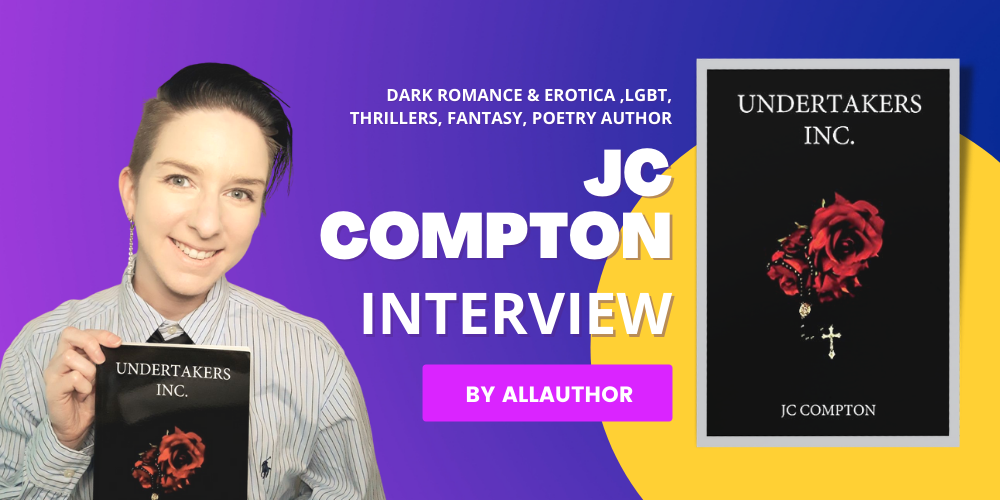 "An avid reader as a child, JC Compton was born in a small town in Normandy on the northern coast of France. They left France at 17, after graduating high school, to move to the USA for the first time. JC published their first book a decade later at 36. JC is known for its steamy, satisfying romance novels. JC writes at night with Japanese rock or metal music playing in the background."
Where were you born and how has it affected you?

I was born in a small town in Normandy on the northern coast of France. My father was American and my mother French. I grew up in a very small world, but with international influence. We were far from everything and surrounded only with the ocean, the forest, and breathtaking cliffs over the Channel Sea. My dreams were born in this beautiful place, but also nurtured by my father's stories about life in America and our Dutch and Cherokee ancestry. This duality between my love for small, enclosed worlds, and the desire to escape to other countries to find my roots, physically or through my imagination, shapes some of the characters I create. Tim and Holly/Lan Thompson embody this duality within me.

What books do you remember reading during your childhood?

I was an avid reader as a child, so I read everything on the shelves at my local library and my school library. The book I read and re-read the most was The Lion, The Witch, and The Wardrobe, by C.S. Lewis. I loved vampire stories, especially the Little Vampire book series by Angela Sommer-Bodenburg. I also read all the classics of children’s literature, such as Little Women, Oliver Twist...

I grew up in a very small world where nothing ever happened, but I left France at 17, after graduating high school, to move to the USA a first time. After that, I was never quite contented with my hometown again, I had itchy feet. I moved again at 19, to Canada this time, then back to France, then I permanently moved back to the USA again at 28.

My father was also a sci-fi writer, a poet, and a singer-songwriter, so he always encouraged my talents. Sometimes he could even be pushy about it. He would tell me I should draw, paint, or write every day. I would butt heads with him over it. My mother loved everything I created. When she passed away, she had the first chapter of a story I had started writing on her nightstand. I continued writing that story for her. When I completed it, my father compiled for me all the information I needed to know about editing, publishing, and copyrights. He passed away within the same year. I did not publish that book (yet), but I published my first book a decade later at 36. I’m sure they are both watching over me and smiling now.

How many books did you read before writing your first published novel?

Probably hundreds. I have read almost all the 19th century classics in French and English, philosophy, poetry, and many, many fantasy series.

What are some ideas for twisting cliches in dark fantasy?

When I have a plot twist idea, I try to picture the exact opposite and see how it would fit in the story. Essentially, I write the opposite of what you would expect, to keep the story interesting. Vampire stories are often about revenge, so I wrote one about love, but not your usual “vampire meets teenage girl”. Many are about the tormented feelings of vampires regarding drinking blood or taking the lives of humans. My characters consider drinking blood their normal way of feeding, but several don’t do it because they are lazy and don’t want to go out!

How many books do you plan to write in the UNDERTAKERS INC. series?

I have just finished writing volume 4, which will complete the first arc of the series. Another arc will start in volume 5, which I am currently writing. This arc will focus exclusively on Fiona’s clan (Tim, Cyril, Hanson, Humphrey, Joe, and Andre). Lan and Shen’s adventures in China will continue in a brand-new series, with the return of some characters from the past. Several characters, including Claude, Rebel, and Joe will also have spin off books about them.

Who inspired the character of Cyril in "Servant With Fangs: Cyril's Story"?

Cyril was inspired by my feelings when watching a Russian ballet dancer perform. He is an artistic, sensitive character, and his life is a stage on which sometimes tragedies play out, sometimes comedies. He is also a character inspired by Daoism. Only when he renounces everything does he finally find what he is seeking. In my stories, not being powerful, not being dominant, being passive are also depicted as strengths.

What should a male writer keep in mind when writing a female character?

A good way to avoid falling into stereotypes when you create a character who is not like you is to consult with someone who actually is like them (gender, character, profession, orientation, etc.)

Midnight. Japanese rock or metal music playing in the background. I tend to write at night and proofread what I wrote in the daytime.

At the end of the day, what makes you most satisfied as an author?

The best thing for me is when a reader gives me a 5-star rating. It means they read my book and it met all their expectations, even if they don’t leave a detailed review. There’s nothing worse than getting super excited about a book and then the plot falls short in the end!

What's the difference between fantasy and dark fantasy?

The lines between genres are very blurry nowadays, but dark fantasy is considered a genre that deals with disturbing themes. I think of what I write as fantasy and it’s pretty lighthearted, but some people might consider my vampires’ profession as undertakers as disturbing. I consider it as a very serious and honorable profession. It all depends on the reader’s sensitivity.

Which one do you prefer - hardbacks, paperbacks, or eBooks?

Paperbacks, because you can carry them everywhere. I like to hold an actual book in my hands, but it has to be light and easy to transport.

“UNDERTAKERS INC. The Necromancer’s Love” is coming out in the next few months. It is volume 3 of the series. In this book, Tim and Cyril adopt a demon daughter and encounter the dangerously friendly demon attorney Belial, with whom Fiona makes a pact. Meanwhile in America, Joe falls in love with a transgender vampire with blue eyes, but they are challenged by a vampire gang leader and another necromancer! I am also working on spin offs about Claude, Joe, Eve, and Stanley (who will appear in volume 4). Joe’s story begins under the Roman Empire and is both tragic and hilarious at times while Claude’s story takes us on a tour of France in the 19th century, from Paris to Aix-en-Provence. Apart from that, I have a one-shot futuristic fantasy tale, and a fantasy saga to publish.

It’s been wonderful. I love meeting new authors and discovering their works!

JC Compton is a thinker and a doer. These are the quotes by famous personalities the author resonates with.

The prettiest smiles hides the deepest secrets. The prettiest eyes have cried the most tears, and the kindest hearts have felt the most pain
Smile 4,121

Every story has an end, but in life every ending is just a new beginning.
Life 4,025

Beauty attracts the eye but personality captures the heart.
AuthorCute 3,026

I love my haters... They make me feel special because... Their dirty little mouths talk about ME all day.
Hate 1,800

Have brimming questions to ask author JC Compton? Ask whatever you like, but keep it appropriate.
** Please note that unanswered questions will not appear on the page. Refrain from posting promotional messages.

The author, a good book and you! Contact JC Compton here.
** Please refrain from spamming and don’t bombard the author with promotional mails/messages. Your IP/Email address may be blocked if found doing so.